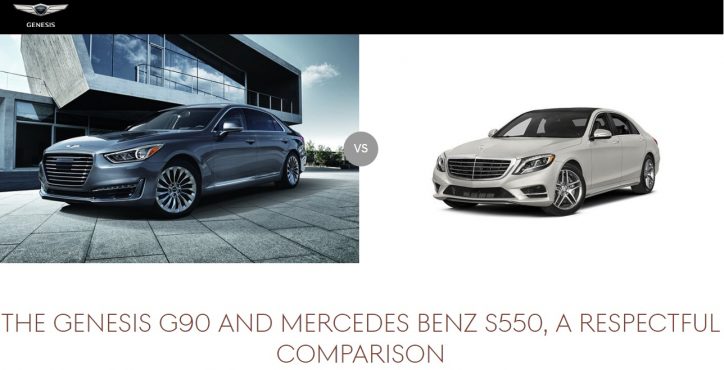 Recently, the luxury car brand Genesis released a video showcasing the fabulous interior of the new G90. The adorable presentation features the struggle between the chauffeur and the pooch brought by his supermodel passenger played by Elle Evans who is known for her part in Robin Thicket & Pharrell’s “Blurred Lines” music video. It was directed by Wayne McClamy who is famous for his works in Call of Duty and EA Sports.

So what does the Genesis G90 offer? The South Korean brand’s website one ups its German rival through a “Respectful Comparison”.

That does not stop there. The G90 claims a technologically-superior driving, navigation and comfort systems too.

The mentioned elements are a standard fit to the G90. On the other hand, the S550 only has them as optional features.

Lastly, the G90 is equipped with Wireless Charging. Now that’s something that the S550 lacks.

Of course, the comparison does not give a thorough review of the two. The engines of the vehicles were not explored, which is the part where the standard S-Class takes it a notch higher than the competition.

The G90 lineup starts with a 3.3-liter turbocharged V6 with 365 hp and 376 lb-ft of torque distributed via an 8-speed automatic transmission. The stock S550 is equipped with a 4.7-liter biturbo V8 engine with 449 hp and 516 lb-ft of torque, which dwarfs even the higher-trim 5.0-liter 8-cylinder Ultimate AWD of the G90.

It should be noted that each luxury car is definitely impressive on its own. The matter about which one is better is subjective. So share your thoughts and your choice through your comments.

Disclosure: This post has been sponsored by Genesis, but all our thoughts are our own.