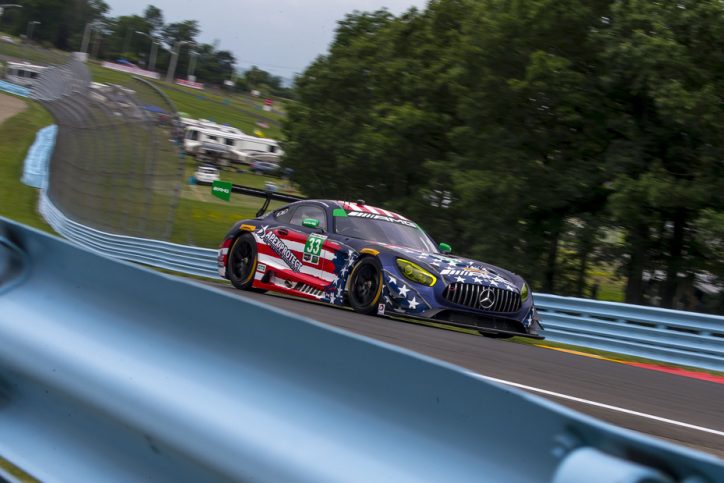 One Mercedes-AMG GT3 stood out during the IMSA WeatherTech SportsCar Championship endurance race last weekend at Watkins Glen International due to its amazing livery inspired by the United States of America flag.

The number 33 Mercedes-AMG GT3 in Sunday’s Sahlen’s Six Hours of The Glen was decorated with the stars and stripes to commemorate the US Independence Day held on July 4th. According to Mercedes-Benz USA, the car was driven by Ben Keating and Jeroen Bleekemolen for Riley Motorsports.

Although the patriotic design was not as extensive as the number 33 car, the number 50 WeatherTech Racing Mercedes-AMG GT3 also featured the American flag in its roofing. The vehicle was driven by Cooper MacNeil, Gunnar Jeannette and Shane van Gisbergen.

There were a total of three Mercedes-AMG Customer Racing Teams during the event. Joining the mentioned two was the number 75 SunEnergy1 Racing Mercedes-AMG GT3 driven by Tristan Vautier.

Each Mercedes-AMG GT3 comes with a naturally-aspirated 6.2-liter V8 engine designated as the M159. The unit is the same engine used in the Mercedes-Benz SLS AMG GT3.

The race car produces 622 hp and 635 Nm of torque. Combined with its very light frame that made heavy use of carbon fiber-reinforced polymer, which only weighs a total of 1,300 kg, the setup allows the auto to sprint from zero to 100 km/h in just 3.8 seconds. Then the vehicle has an electronically-locked top speed of 332 km/h.

Photos of the Mercedes-AMG GT3 at IMSA

Check out the various images of the Mercedes-AMG GT3 at IMSA last weekend in the gallery below: