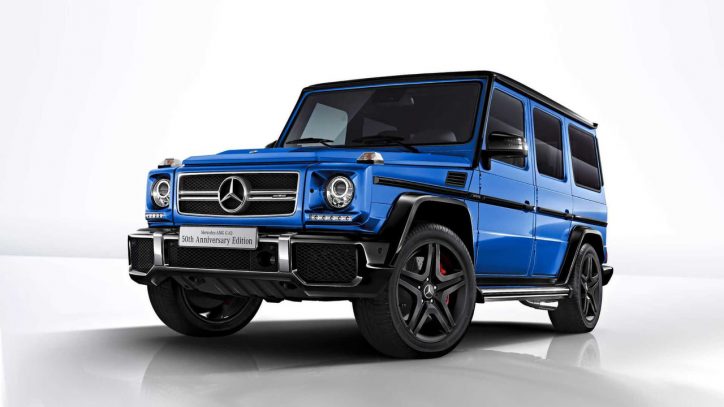 Here are the things we found out about the Mercedes-AMG G63 50th Anniversary Edition based on several sources:

Outside, the high-performance G-Class takes a Mauritius Blue metallic paint finish. It is matched with blacked out bumpers, roof, fenders, mirror caps and side strips. A set of dark 20-inch AMG wheels also complement the color-theme of the vehicle.

Mercedes offers four two-tone themes for the special G63. The surfaces inside the iconic SUV makes use of high-end Designo leather with diamond trims.

Twenty-four units of the new G-Class variant have interior designs in porcelain white, 15 come in black, six take the mocha brown shade and five are offered in saddle brown color. Three of the mentioned units will also include an AMG carbon fiber trim package for a sportier appeal.

The 5.5-liter biturbo V8 engine of the G63 remains intact in the special G-Class. The unit is good for 563 hp and 561 lb-ft of torque. The power of the vehicle is distributed through a seven-speed automatic gearbox.

The numbers take the G63 from zero to 60 mph in just 5.3 seconds. Then the top speed of the auto is electronically-limited at 130 mph.

The new Mercedes-AMG G63 50th Anniversary Edition is only available in Japan. Only 50 units of the special SUV variant will be produced.

The 50th anniversary AMG G63 version costs 22.2 million yen, including taxes. That translates to around $194,604 at present exchange rates.

Check out the images of the Mercedes-AMG G63 50th Anniversary Edition in the gallery below: