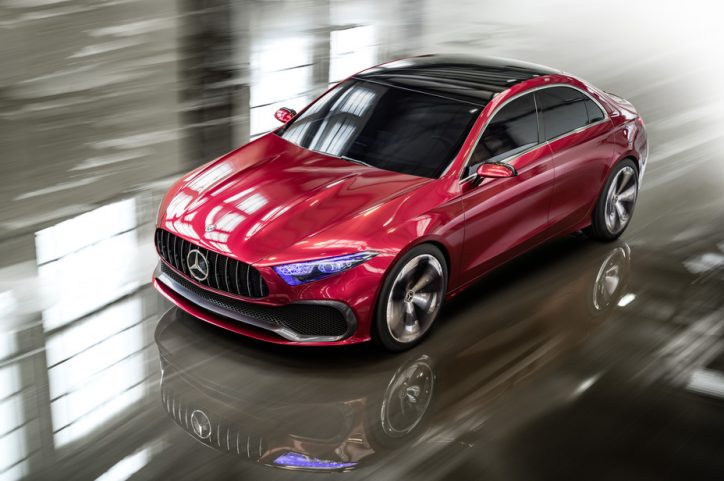 The Mercedes-Benz Concept A is scheduled to make its world premiere at the 2017 Shanghai Auto Show together with the new Mercedes-Benz S-Class. However, Mercedes-Benz USA just revealed the concept car in its official website.

The auto pictured above is the Concept A. The concept car embodies the Aesthetics A design language of Mercedes. It gives us a preview of the future styling of the brand’s next-generation of compact vehicles.

Concept A features smoother surfaces compared to the exterior design of Mercedes’ current compact vehicles like the A-Class, B-Class, CLA and GLA. According to Gorden Wagener, Chief Design Officer of Daimler, the new design language is characterized by “perfect proportions and sensual treatment of surfaces with reduced lines”. He added that Aesthetics A is the next milestone of the “Sensual Purity” design philosophy of the brand.

The Concept A sedan that will be showcased in Shanghai Auto Show this year measures 179.9 inches long, 73.6 inches wide and 57.6 inches high. Although it is a premium sedan, it does bear many coupe-like elements because of its sexier appearance.

The car is fitted with 20-inch light alloy wheels. Then it noticeably carries the Panamericana grille that debuted earlier in the new Mercedes-AMG GT line models. In addition, the vehicle is accentuated by its futuristic headlamps with bluish hue. The taillights are also edgier. Last but not least, the concept vehicle is highlighted by its large panoramic glass roofing.

Check out the official photos of the Mercedes-Benz Concept A sedan in the gallery below: