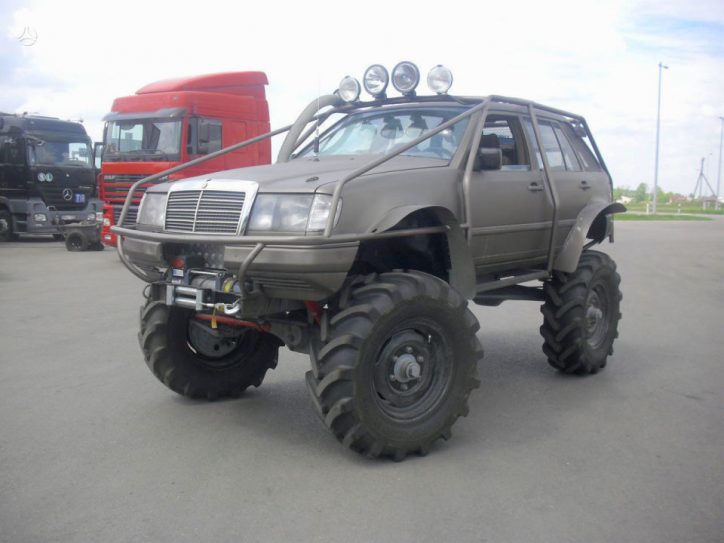 The 1987 Mercedes-Benz E300 is such a darling for families when it came out in the market. However, one owner of the car turned it into a truck.

This particular vehicle is currently on sale in Lithuania. It features the body of the classic E300 but the auto is made rugged by a series of rollbars and fog lights on the roof. Then its hatch at the rear is removed to make way for what appears to be a ventilation system for the truck’s interior.

Next, it is matched with the functionality of the Mercedes-Benz Unimog with its massive off-road wheels wrapped in R20 Voltyre tires. Going under, it appears to imitate the sturdy portal axles of the Mercedes-Benz G-Class 4×4². The source claims the transformed truck possesses an all-wheel drive system.

Under the hood of the Mercedes E300 truck is a diesel-fed 3.0-liter six-cylinder engine. The unit is capable of producing up to 140 hp. The power of the vehicle is distributed via an automatic gearbox.

The interior of the Mercedes E300 retains its five-seating capacity and almost all of its stock elements with the exception of the added steel frame support plus new switches for the fog lights and probably controls for suspension adjustment.

The truck only has a price tag of 5,000 euros. Now, that’s a pretty neat deal. But again, its buyer has to pick it up in Lithuania.

Check out the photos of the 1987 Mercedes-Benz E300 station wagon that has been turned into a truck in the gallery below: