Nico Rosberg did not win the Abu Dhabi Grand Prix… but he didn’t need to. His Mercedes teammate Lewis Hamilton needed a miracle to overcome Rosberg’s lead in the points, and while Hamilton took the race win, Rosberg took second place, which was more than enough to become the 2016 F1 champion. 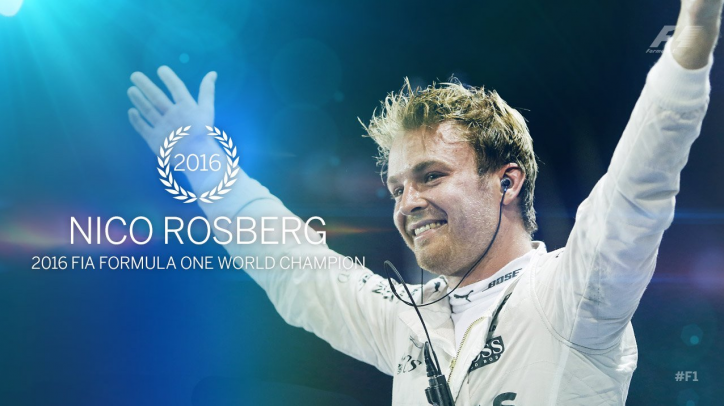 This is Rosberg’s first F1 championship, having spent 11 seasons and accomplishing 206 starts so far in his F1 career. He capitalized on a hot start, winning the first four races of the season and scoring just enough points to keep Hamilton’s charge at bay. He became F1 champion 34 years after his father, Keke Rosberg, accomplished the feat in 1982 for the lone title of his 9-year F1 career.

Rosberg and Hamilton had hugs and handshakes right before and during the presentation of the trophies, but clearly there will be some discussion after Hamilton raced selfishly because of the odds he had to face. This must be frustrating for the Brit, and surely he will be tending to his pride after losing out to Rosberg by a mere 5 points–and he will go back to that engine failure in Malaysia. Hamilton did win four straight races to close out 2016. Still, Hamilton suffered through some pretty bad starts in some races, which also cost him some points early on.

With four laps to go, a Mercedes victory was not even assured. Sebastian Vettel tried to make it a bit more exciting towards the end, but Rosberg managed to defend his position. Vettel settled for third place, but surely Ferrari is delighted to be in the podium in the final race. There were high expectations for Ferrari in 2016, but the Scuderia had to watch Mercedes dominate and Red Bull take the mantle of the challenger. The team finished third in the constructors’ championship.

Hamilton took 10 race wins in 2016 overall, with Rosberg taking 9. The other two remaining race wins in 2016 were taken by each of the Red Bulls of Daniel Ricciardo and Max Verstappen. Ricciardo finished third overall in the drivers’ standings, followed by Vettel in fourth, and Verstappen in fifth.

This race also marks what would be Jenson Button’s last F1 race, after hinting he won’t be using his 2018 contract and has no intention of racing next season. Button won the drivers’ championship in 2009 at the head of a formidable independent outfit, Brawn GP, which later became the Mercedes AMG Petronas F1 team. Button suffered a retirement in this Grand Prix.

That’s a wrap on the 2016 Formula One season, folks. We have a new F1 champion, and we’re certainly looking forward to more action when it’s time for the 2017 season.