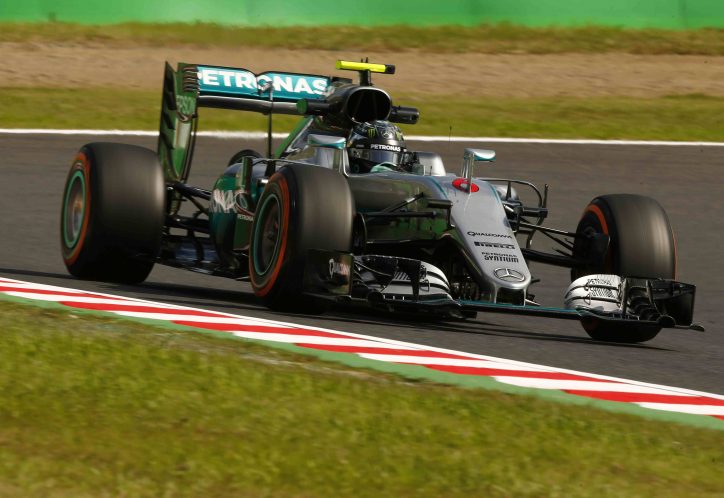 Nico Rosberg extended his lead in the standings as the Mercedes team clinched the 2016 F1 constructors’ championship at the Japanese Grand Prix. Lewis Hamilton, who seemed to be acting out in some of the official events during the weekend, finished third.

Sandwiched between the Mercedes cars was the Red Bull of Max Verstappen. This is his third-straight runner-up finish.

Rosberg was the frontrunner from the start and never looked back. Hamilton, meanwhile, had a bad start but fought back to claim a podium finish. He just couldn’t get past Verstappen towards the end. He will surely wince at Rosberg extending the lead. But with four races left, there are still plenty of opportunities to challenge his Mercedes teammate.

Mercedes has now won three straight constructors’ championships, with no real challenger yet to rise up from the ranks.

It is unclear whether Hamilton is still upset about his finish at the Malaysian Grand Prix. His engine caught fire and he had to retire a race that he practically had in the bag. After, he stopped just short of accusing Mercedes of rigging the cars so that he would lose.

In Japan, Hamilton had walked out of the Mercedes press briefing. He declined to answer any questions and lashed out at some members of the media. The defending F1 champ said some took advantage “of certain things,” referencing how the press reported on his fiddling around on Snapchat during the drivers’ press conference earlier in the weekend.

This time, Hamilton can’t really blame anyone. He knows the Japanese Grand Prix was a blown shot at getting back the points he lost, after securing a front-row start with Rosberg in front. His disastrous start saw him drop to eighth after the first corner.

It’s going to be a long two weeks before the United States Grand Prix in Texas. Here’s hoping we get a dogfight between the Mercedes cars.