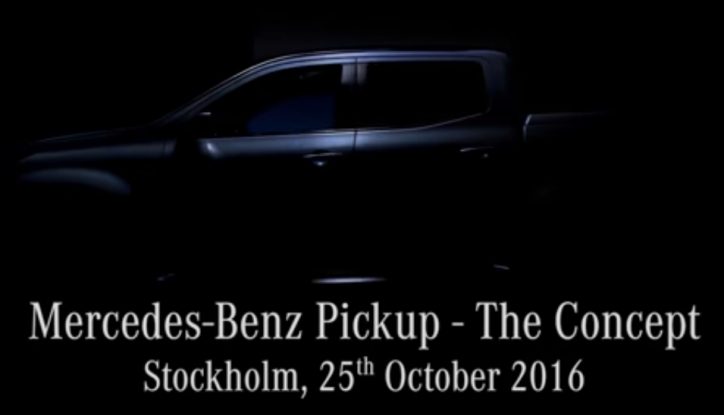 Mercedes-Benz teases its new pickup truck concept ahead of its world premiere on October 25th.

Mercedes-Benz confirmed through a teaser that it will finally unveil its new pickup truck concept. Called the Mercedes-Benz GLT, the video said the vehicle will make its world premiere on October 25, 2016 in Stockholm, Sweden.

The new Mercedes pickup truck is based on the platform of the Nissan Navara but with the signature aesthetics of three-pointed star brand. Based from the tidbits of information shown in the teaser, the frontal half of the GLT appears to follow some of the aggressive styling elements present in the SUVs of Mercedes.

When news of the GLT began to surface last year, people were divided about what to expect from the pickup. Some predicted that Mercedes might follow a more utilitarian approach in it similar to its vans. However, the teaser here just proves that we are looking at an auto with the signature luxury and sporty elements of Mercedes as the brand pointed out last year. One might even mistake that we might be watching a new reveal for a car in the early portion of the teaser.

For now, Mercedes remains mum about the specifications of the GLT. Expect it to have the same seating and hauling capacity present in the Nissan Navara though. Of course, the engine of the GLT will be sourced from Mercedes. A 2.0-liter inline-four engine is a huge possibility for the pickup. There will likely be a gasoline-powered model too with a V6 unit.

Watch the teaser of the Mercedes-Benz GLT below: