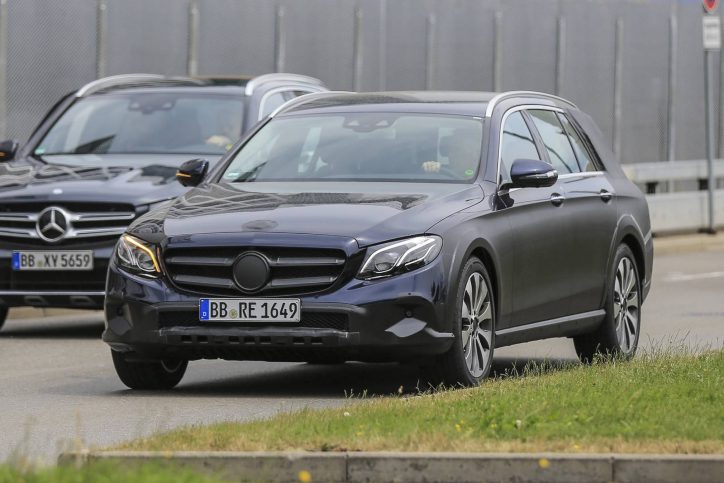 A spy shot of the 2018 Mercedes-Benz E-Class Estate all-terrain model, which is set to rival the Audi A6 Allroad.

New spy shots reveal that Mercedes-Benz might be working on an all-terrain version of the E-Class T-Modell. The photos released by a source shows a new E-Class estate unit having a higher ride height, which suggests that the three-pointed star brand is probably working on a potential rival of the Audi A6 Allroad.

As a recap, the Audi A6 Allroad integrates sport utility vehicle elements into an estate. The auto is characterized by its slightly increased ride height, bulkier body design, expanded wheel arches, and new set of sports wheels.

The raised suspension setting lets the A6 Allroad have more agility, especially during bends. The feature also provides it better handling. The same set of features can be found in the spy pictures here of the upcoming version of the E-Class Estate.

Details about the upcoming all-terrain station wagon of Mercedes is still scarce. Therefore, we have no idea yet about its engine options. However, the report predicts that the vehicle will most likely carry the six-cylinder engine found in high-end E-Class models. If this is true, it would give the E-Class all-terrain a fighting chance against the 3.0-liter V6 power unit possessed by the A6 Allroad.

The post claims that the Mercedes E-Class estate all-terrain will be unveiled around the first half of September this year.

Check out the spy photos of the Mercedes-Benz E-Class Estate all-terrain model in the gallery below: