Mercedes-Benz CLS Gets a Stealth Wrap 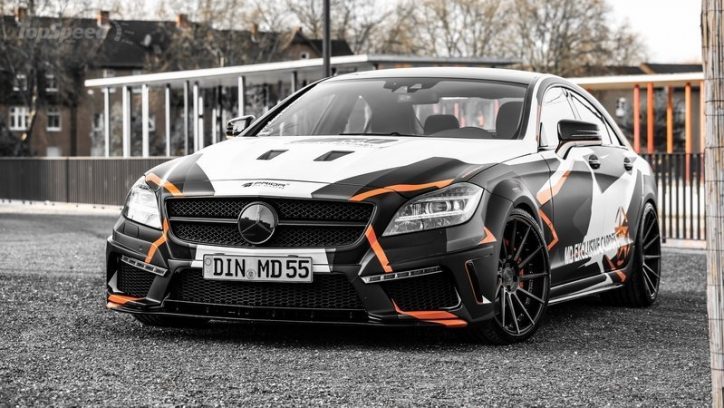 M&D Exclusive Car Design recently pimped up a 2016 Mercedes-Benz CLS 500. The firm gave the car what it called the “Stealth” wrap and rechristened it as the CLS 500 PD550 Black Edition Stealth.

The wrap was probably intended to let the CLS blend in the concrete jungle as M&D wrapped it in a combination of Matte charcoal or Matte black over Matte white complete with orange accents. However, one might argue that the wrap does not make the car stealthy at all.

Well, we might have to agree with that as the CLS already commands a lot of attention because it belongs in the top hierarchy of Mercedes. Then the wrap in black, white and orange does not really help in making the car fuse smoothly with its surroundings.

M&D also added a custom front bumper with driving lights similar to the CLS 63 AMG plus new front wings, side skirts, spoiler, rear bumper, and air intakes in the hood. After that, the tuner topped the new exterior elements with Rennen Forged RL 17 forged alloy wheels.

Lastly, M&D boosted the V8 engine of the CLS. With a straightforward ECU tuning, the tuner improved the power of the car to 498 hp with 546 lb-ft of torque. The speed limiter of the auto was removed as well.

So far, we don’t have official figures from the tuner regarding the improvement in the car’s acceleration time. However, it should get a split-second quickness from its original zero to 60 mph rush.

Despite the wrong choice of a new moniker, M&D certainly did a good job in making the CLS a lot cooler.