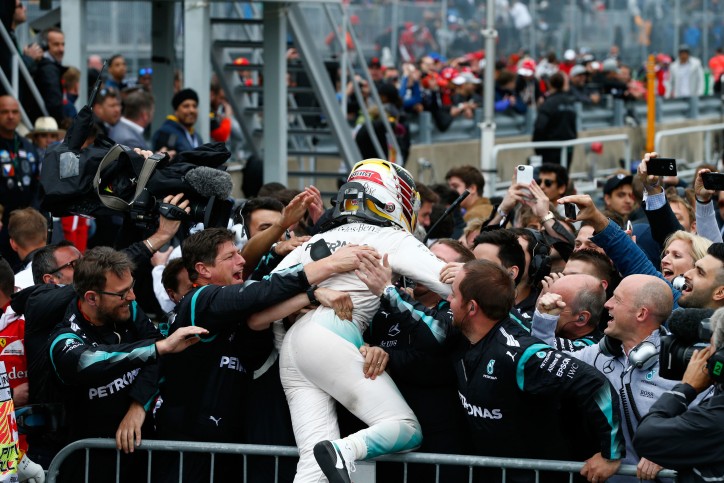 Lewis Hamilton prevailed for the second straight race, taking a relatively hard-fought victory at the 2016 Canadian Grand Prix after fending off the vastly improved Ferrari of Sebastian Vettel.

Vettel took the lead with a great start to the race from P3. He went past the two Mercedes, who had a bit of contact exiting turn 1, with Nico Rosberg forced to go to the grass and Hamilton aggressively defending the inside.

Hamilton said he thought the start would be ‘a breeze’ after a perfect practice start. “But when it came around for real it felt like I was going nowhere, so I need to figure out what happened there,” Hamilton said. “I then got massive understeer into Turn One with cars attacking from all sides and had an unfortunate tap with Nico.”

Ferrari blames its two-stop strategy as the mistake that cost Vettel a shot at winning the race. Team principal Maurizio Arrivabene said the team overestimated the degradation of Vettel’s tyres, which is why they called him into the pits during a Virtual Safety Car period that arose in lap 11 with the engine failure of Jenson Button’s McLaren.

Vettel, however, was quick to point out that Hamilton was simply ‘too quick’. The Mercedes one-stop strategy helped, too, of course.

Hamilton gave a nod to Muhammad Ali as he slowed down, saying “Float like a butterfly, sting like a bee.”

Rosberg, meanwhile, finished just in fifth place because he also had to deal with a puncture near the end. Valtteri Bottas took the remaining podium spot, while the surging Max Verstappen took fourth.

With the win, Hamilton is now trailing Rosberg in the standings by a mere 9 points (116 to 109). Vettel is in third place with 78 points.

The next race is the European Grand Prix in Baku next weekend, so see you for another round of F1 results and recaps!