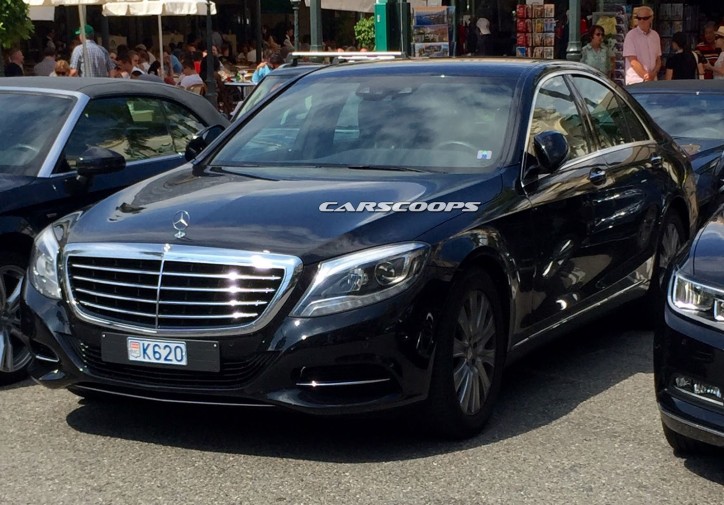 Some photos of what appears to be the 2017 Mercedes-Benz S-Class have begun circulating online. Based on the spy pictures provided by Carscoops, the upcoming flagship saloon car of the three-pointed star brand will get a facelift.

The 2017 S-Class is expected to be unveiled at the Paris Motor Show this fall. However, the source already acquired spy photos of it through a reader who goes by the name Jay T. The good thing about the images is that the car does not have any camouflage at all, which gives us a clear view of what to look forward to from the next S-Class.

Jay T said he took the photos while he was on vacation in Monaco. He was driving around the town center when he noticed several facelifted S-Class sedans going around the place. One of them was parked near a casino.

To the untrained eye, the car in the pictures do not look that different from the existing S-Class. But looking closer, one could notice that the cars are equipped with the redesigned multi-beam LED headlights complete with daytime running lights. Although not evident in the photos, the report added that the S-Class might also have restyled air inlets at the bottom corner similar to the other prototypes of the car that were spied earlier.

Although we have no idea what is inside 2017 S-Class, the article speculated it will have a frameless display on the dashboard. The infortainment system’s gesture controls will be upgraded too. In addition, the steering wheel will feature a three-spoke rim.

As for the engines. It is not clear whether the 2017 S-Class will carry over its existing engine types with only minor boost or it will finally debut Mercedes’ new M256 straight-six engine.