SEND US A TIP
Concept, Featured
0

From a Sketch to the Road: The Mercedes-Benz Design Process 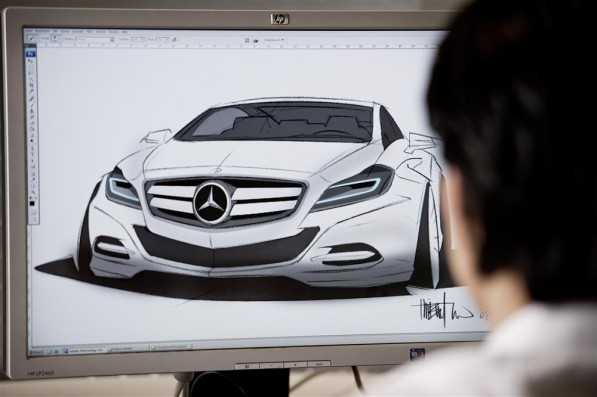 All car designers share the same passion for innovation, functionality, adventure and attention to detail. At Mercedes-Benz they also have the time to explore, to try new ideas and even make mistakes along the way.

On average, it takes three years for a sketch to become a real car, being transported by industrial chains around a production plant. The shiny new car is the culmination of a lot of imagination, inspiration and consultation.

No designer works in isolation–Mercedes designers collaborate with colleagues in the development and production departments to plan the way forward. Design at Mercedes includes concept, detail and then production.

The start of the design process–the emotional phase–involves a drawing. Designers use either an old-fashioned pencil on paper or a virtual drawing board to create this image, but it’s a vital component as it brings the idea from the designer’s mind. This allows others to critique it, to suggest modifications and to add their own ideas.

Using a software package is a huge advantage to designers, as these images can be automatically tweaked to include particular proportions and lines, making sure the overall shape is coherent and balanced.

However, not everything can be simulated on a computer. Therefore, clay models are produced from the sketches. Only then can the designers decide whether their designs will have the desired effect in three dimensions too.

With the help of software, designers produce a huge range of sketches that differ only slightly, while maintaining design cohesion and high precision and meeting the original project brief. Once the designs are done, they go to the power wall, a seven-metre wall onto which company computers project the designs. The team can rotate the images and explore them in almost infinite detail from every angle.

Once everyone’s happy with the design, it can become a physical reality, albeit a diminutive one. A 1:4 scale clay model of each variant is produced so that designers can see their ideas in the flesh. The 3D version of a great on-paper design sometimes just doesn’t cut it, and these versions can be eliminated from the process. The “winner” goes through to the next stage–a full-sized milled model–the first prototype.

Every feature of this 1:1 model is hand-made, so it looks just like the real thing. Of course a car isn’t just a chassis, so every internal feature has to be sketched and rendered too. The design team aims for an attractive look that mirrors or complements the outside.

Once the interior has been sketched, the team decides what fabrics, leathers, fittings and colours will be used. Mercedes-Benz has a huge range of textures and colours available. When the combinations have been settled upon, they are incorporated in 1:1 scale interior models to see how they look in different lights and from different angles.

Finally, the Board of Management has to accept the model, and once it does, the production lines can finally gear up.