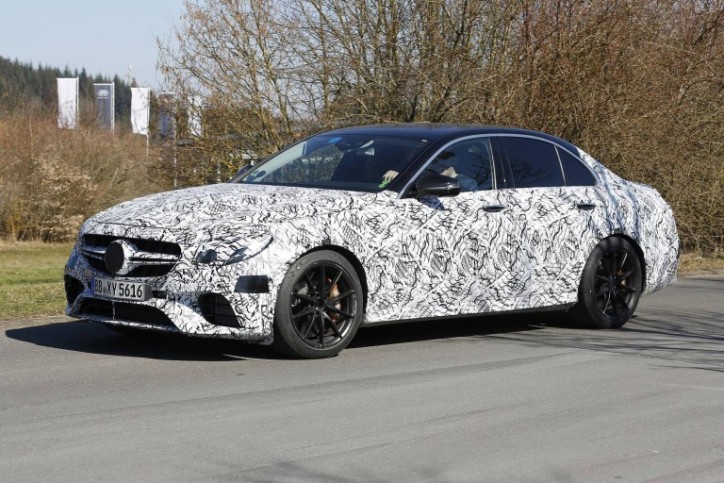 A spy shot of the Mercedes-AMG E63.

After seeing some spy photos of the upcoming Mercedes-AMG E63, leaked documents from Russia recently gave us an idea about what to expect from its power unit. Looking at the leaked images, they appear to have come from a Mercedes-Benz brochure as the glare of a camera flash can be observed in the images.

According to a German car forum online, the E63 will get as much as 563 hp and 553 lb-ft of torque. That’s a significant leap compared to the pure sports car of AMG—the GT and its S model. Now, if you think that’s too much, the E63 S variant of the car is packing up to 603 hp and 627 lb-ft of torque.

The source indicates that the AMG models of the new E-Class will come with all-wheel drive configurations as standard fitting. The outputs of the cars are distributed through the 9-speed MCT (Multi-Clutch Transmission) automatic gearbox.

The leaked info about the E63 and E63 S also reveal the zero to 62 mph acceleration of each sedan. Based from the source, the E63 is capable of accelerating from zero to 62 mph in just 3.7 seconds. Then the E63 S can cover the same distance in just 3.5 seconds.

The top speed of both cars are still electronically-limited to 155 mph. However, it should be noted that the numbers can be raised with the optional driving package of AMG.

Check out the captures of the leaked images containing information about the Mercedes-AMG E63 and E63 S below: