Quite a number of infamous names are among the known owners of the Mercedes-Benz W100 600, a precursor to what we now know today as the S600, and GQ ran a piece that seeks to provide us with the reasons why such people would opt for such a car. 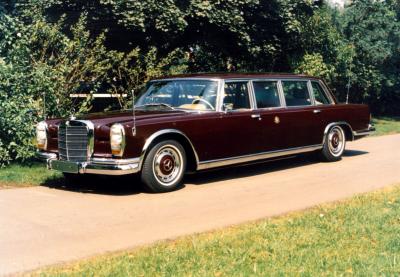 One of the nicknames of the Mercedes-Benz 600 is ‘Großer’ or ‘Grosser’, which means ‘larger’ in German. Not only is it a big car, it’s also quite expensive. It was, after all, the flagship and hence the most spare-no-expense Mercedes at the time. We all know cost is prohibitive, so the epic MSRP of the 600 at the time pretty much limits the prospective buyers. Some trims even include being bulletproof.

That’s why many heads of state in the mid-60’s to early 70’s went with this costly beauty. The list includes then-dictator of the Philippines Ferdinand Marcos (he owned four variants, apparently). Then we have North Korean dictator Kim Il-Sung, his son and successor Kim Jong-il, and then his son and successor, Kim Jong-un. Saddam Hussein also had one. Fidel Castro is also included in the list of former 600 owners.

In addition, the 600 was a prominent fixture of old James Bond flicks–perhaps the most prominent of which was one used by the villain on two movies.

Well, that is indeed quite the list, and of course GQ lists more in the article, but let’s not forget some of the other personalities who have owned a 600. The owners list also includes the Pope and religious leader Guru Maharaj Ji, as well as prominent people such as Hugh Hefner, John Lennon, George Harrison (who also bought Lennon’s), Jack Nicholson, Elvis, and even Jeremy Clarkson (who you’ll find made it to GQ’s evil owners list).

Check out the GQ article by following this link. You’ll find the reasons evil people opted for the car rather amusing!