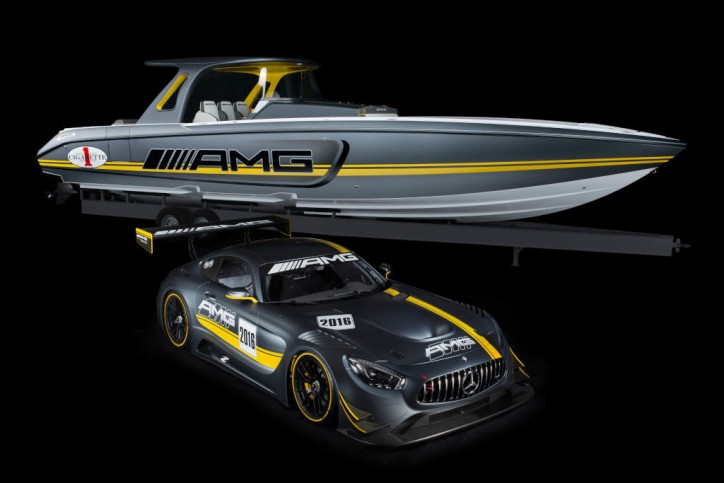 The Cigarette Racing Team boat based on the Mercedes-AMG GT3 was finally unveiled at the Miami International Boat Show on February 11. Official photos of the two were released by Daimler.

Early this month, a sketch of the two were already teased. It showed the superimposed images of the racing boat and racing car to give viewers an idea of how they compare to each other and to demonstrate the scale of the two. This time, the photos show the actual car and boat standing beside each other.

As a recap, the Mercedes-AMG GT3-inspired boat is called the Cigarette Racing Team 41′ SD GT3. It borrows some of the styling elements of the car it was based on. Daimler said Gorden Wagener and his team had a hand in putting together many AMG elements to the boat.

Measuring 41 feet long and weighing just a little more than 20,000 lbs, the racing boat possesses twin Mercury Racing engines with NXT6 Drives. The unit provides it an output of 1100 hp. It’s speed can go up to 100 mph (electronically-limited).

For those who are interested to witness the new Cigarette Racing Team 41′ SD GT3 in the flesh, they can still view it at the Miami Marine Stadium Park & Basin until this Monday, February 15.