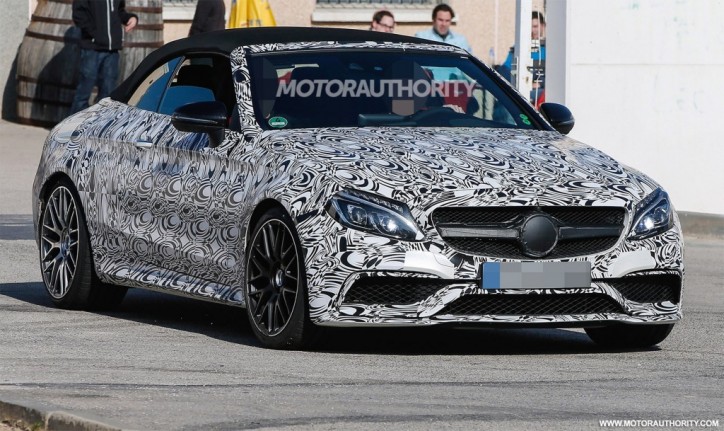 More spy shots of the 2017 Mercedes-AMG C63 Cabriolet surfaced. It should be noted that there have been numerous sightings of the car like during its winter testing. Another variant of the auto was spotted not so long ago too, which is the Mercedes-AMG C43 Cabriolet.

Based on Motor Authority, which is the source of the spy shots, the giveaways indicating the set of pictures is that of the Mercedes-AMG C63 Cabriolet are its lower suspension, wider track, sportier bumpers, square exhaust tips, plus bigger wheels, tires and brake calipers.

According to the source, the upcoming range-topping AMG variant of the C-Class convertible will most probably carry over the power unit of its coupe counterpart. That’s the 4.0-liter biturbo V8 with 469 hp. Then its C63 S model is expected to possess the same engine but with an output of 503 hp. The power of the two are distributed through a seven-speed automatic transmission with the S model getting a limited-slip differential.

The report estimates that the zero to 60 mph sprint of the convertible will be at along the four-second bracket. It will definitely be quicker than the coupe because of the weight it shed off from its roofing. As for the maximum speed of the C63, it should be electronically-limited to 155 mph. The more powerful S model will possibly come with a top speed of 180 mph.

Check out the new spy photos of the 2017 Mercedes-AMG C63 Cabriolet in the gallery below: