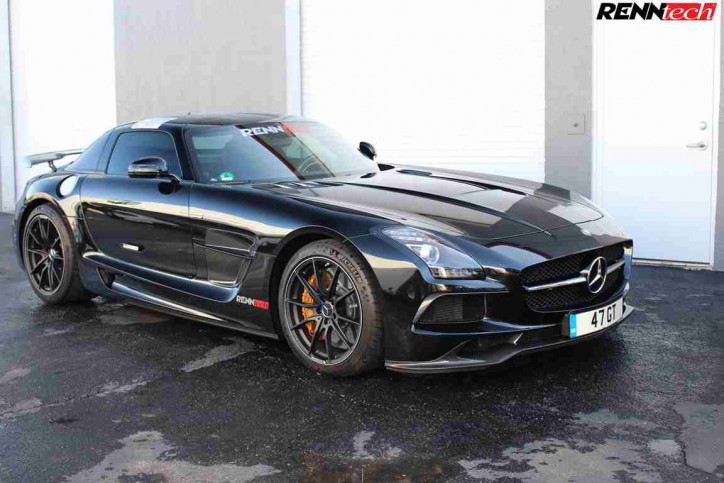 RENNtech recently revealed its latest tuning kit for the Mercedes SLS AMG. The new package gives the sports car up to 613 PS and 698 Nm.

So far, the details about the latest work of RENNtech with the SLS are scarce. According to the Germany-based Der Tuning und Styling Blog, it also has the specialist’s signature carbon fiber splitter, side skirts, rear spoiler, and diffuser.

Furthermore, the photos show that the car’s suspension have been lowered and it looks like it has a new exhaust system too. The windows are tinted as well to provide the auto’s occupants a little privacy.

Mercedes SLS AMG: The Last of the Naturally-Aspirated V8 Breed

The production of the SLS Class has already come to an end. The range saw its final hurrah with the release of the 2015 Mercedes SLS AMG GT Final Edition, and the entry of its successor, the Mercedes-AMG GT. However, the SLS remains as one of the best cars ever crafted by the performance division of the three-pointed star brand.

Aside from its breathtaking design, which is further accentuated by its Gullwing variant, the sports car is the last road car of Mercedes to be powered by a naturally-aspirated V8. At present, there is another auto of the brand that carried over the engine of the SLS AMG, the Mercedes-AMG GT3. But it should be noted that it is exclusively available for GT3 racing teams.

Check out the photos of the RENNtech-tuned Mercedes SLS AMG in the gallery below:

Here’s a video of the car uploaded in YouTube: