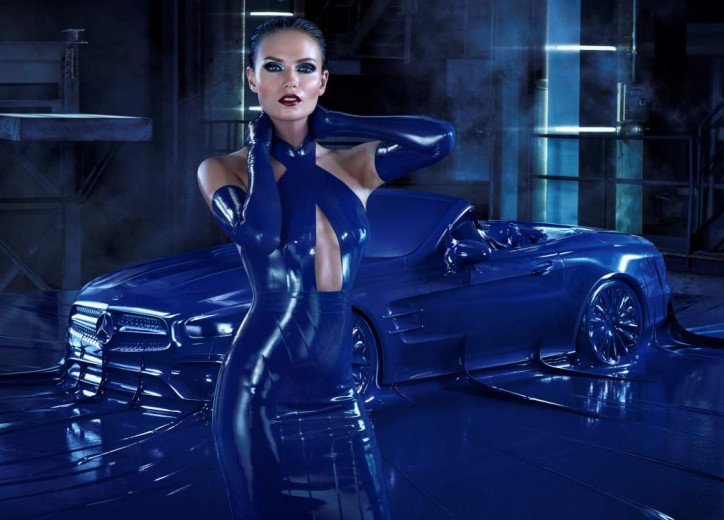 Natasha Poly poses with the Mercedes-Benz SL in her background.

Mercedes-Benz Fashion releases its new campaign and film for Autumn/Winter 2016. Its subject is the new facelifted Mercedes-Benz SL.

The campaign is titled as “Obsession with an Icon.” It showcases the SL wrapped in blue latex to highlight its striking curves and lines. The name of the campaign is also just befitting for the colorful history of the SL class that goes all the way back to 1954.

The gorgeous Russian supermodel Natasha Poly is chosen to star in the campaign. She plays the part of someone really obsessed with the SL as shown by her powerful emotions in the presentation. The model appears sexily clad in matching tight-fitting blue latex to complement the sensual appeal of the car.

According to the Global Media Site of Daimler, the photoshoot and film were made in Miami, Florida. Jeff Bark took the helm for the artistic photography featuring a cool and lustful theme.

Atsuko Kudo, a London-based designer specializing in fabric, took charge of the wraps using a 130 square-meter personalized latex, which consists of five sheets masterfully glued together by hand. She is a popular figure in the fashion business as she was responsible too in some of the fabrics worn by the likes of Beyonce, Lady Gaga and Kate Moss.

Check out the photoshoot of the new Mercedes-Benz Fashion campaign in the gallery below:

Hit the play button also to watch the short film made for the campaign: