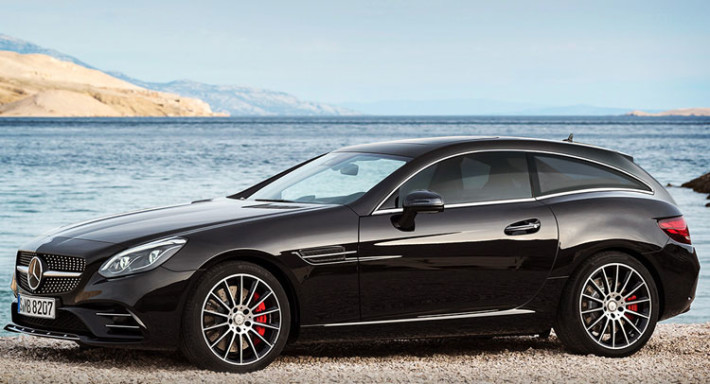 What the studio did was it took the design of the AMG version of the new SLC and mated it with a revised rear of the CLS Shooting Brake. Some traces of the BMW Z3 M Coupe and the GLA 45 AMG could also be found on the SLC Shooting Brake rendering.

The end product was an all-new concept car that almost looked too real and not just an obvious product of a simple Photoshop work.

One of the changes in the concept car is its roof too. Instead of the signature retractable roof of the SLC, X-tomi seemed to have fixed it in place and positioned a B-pillar to hold it permanently.

A Quick Look at the Mercedes-Benz SLC

Mercedes-Benz just unveiled the new Mercedes-Benz SLC. From the information provided by the company, the successor of the SLK will come in five models namely the SLC 180, SLC 200, SLC 300, SLC 250 d, and the AMG SLC 43.

The entry level SLC 180 will have a 1.6-liter turbo inline-four with 156 hp and 250 Nm of torque. The range-topping model, the AMG SLC 43, has 3.0-liter biturbo V6 engine capable of producing 367 hp and 520 Nm of torque. The SLC 180 and the SLC 200 are both equipped with a six-speed manual transmission gearbox with an optional upgrade to a 9G-TRONIC gearbox. Starting from the SLC 300 up to the AMG SLC 43, the 9G-TRONIC gearbox comes as a standard fit.