SEND US A TIP
E-Class, Videos
0

Another Video Teaser of the Mercedes-Benz E-Class is Out 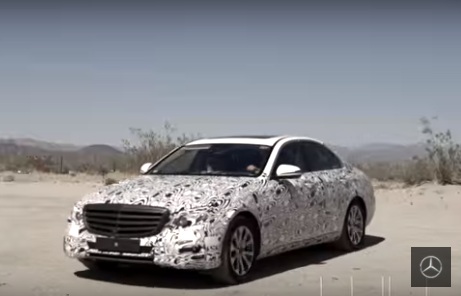 The 2017 Mercedes-Benz E-Class while undergoing testing.

In just a few weeks, the next generation of the Mercedes-Benz E-Class will be unveiled. The new sedan carrying a 2017 model year will make its official debut on January 11, 2016 at the North American International Auto Show in Detroit.

To hype the arrival of the new E-Class, Mercedes-Benz released another trailer of it via its official YouTube channel. The video shows the camouflaged version of the auto undergoing comprehensive testing in different locations, climate conditions, and roads. The clip also demonstrates the various technological features of the car that aim to make driving experience safer, more convenient, and enjoyable.

The video reveals several key information about the upcoming E-Class. According to the clip, the auto is a tenth generation product. It reveals too that there are 1,200 prototypes of it.

All units have undergone a combined 12,000,000 kilometers of extensive testing in all four continents of the globe. That includes 10,000 autonomous braking tests, and 5,000 autonomous lane changes. Moreover, the video indicates that it took 1,200 engineers to make the next E-Class.

There’s a lot of stuff to look forward to with the upcoming E-Class. The most evident feature of the new E-Class is that it will adopt the styling cues of both the S-Class and C-Class as the range sits in between the two anyway. The car notably gets the MRA platform used by the C-Class but its fascia borrows a lot of elements from the S-Class.

On top of those, the 10th-gen E-Class will be equipped with a lot of advanced tech—some of them are not found yet on any of the three-pointed star brand’s vehicles. Among them are the Pilot Parking System, improved Multibeam Adaptive Light System, enhanced Active Braking Assist, Smartphone Locking, Evasive Steering, and Pre-Safe Sound.