Prior Design Mercedes-Benz C63 AMG Vs Other Super Cars 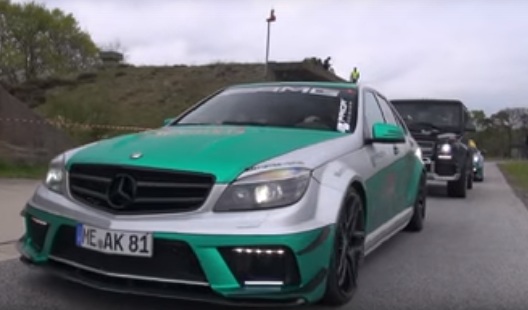 The Prior Design Mercedes C63 AMG.

One of Prior Design’s work involving the Mercedes-Benz C63 AMG is called the Androsch Edition. This particular car was given a couple of visual enhancements making it stand out from its stock model.

The AMG W204 C-Class used by Prior Design here originally came with a silver finish. But the specialist highlighted its hood, roof, front bumper, and lower half of its side panels going to the taillights with petrol green wrap. Prior Design decals also adorned its sides and rear portion.

Furthermore, the front grille of the C63 AMG were blacked out plus it was given new bumpers, front lip spoiler, subtle wings on the front bumper, air intakes, wide fenders, and a rear wing. The firm retained the original AMG wheels of the car though.

It’s not clear whether Prior Design tinkered with the engine of the C63 AMG. But as a reminder, the car already possesses a 6.2-liter naturally aspirated V8 power unit. This allows the car to build up to 487 hp.

To test the performance of the customized C63 AMG, Prior Design pitted it against other super cars like the Audi RS3, Porsche 911 Turbo 997, and a Ferrari 458 Italia.

Despite the upgrades in the Mercedes, it was beaten by the three cars it went against. There was no shame in losing to all of them though, especially against the beautiful-looking Ferrari with another Prior Design package.

Check out the video of the Mercedes-Benz C63 AMG below: