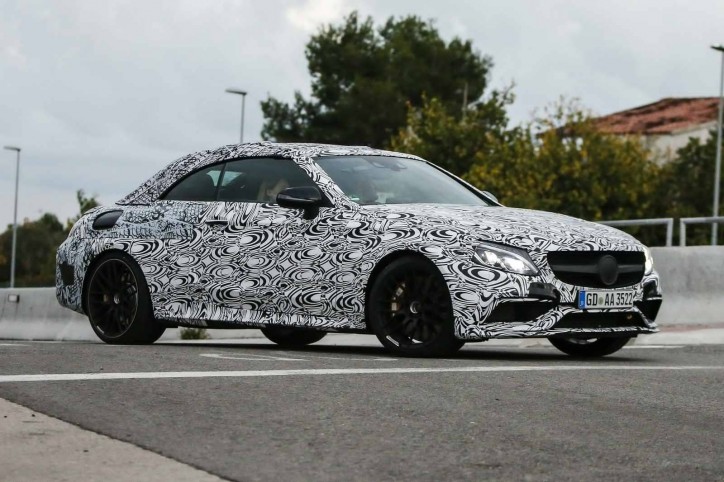 The first spy shots of the 2017 Mercedes-AMG C63 Cabriolet recently surfaced. The car appeared in heavy camouflage, but its distinct design gave it away as the AMG version of the C-Class Convertible.

According to various sources online, the Mercedes-Benz C-Class Cabriolet will make its debut sometime in 2016. The high-performance AMG version of the convertible is expected to debut alongside its standard model.

Spy pictures of the Mercedes-Benz C-Class Cabriolet have been going around since last year. Still shots as well as videos of the car were released by independent sources and auto sites going back to that period. Compared to the earlier photos of the C-Class Cabrio though, these new set of photos show the top-down having a sportier posture. The subject of the images here display a lower suspension. The body is also wider.

Other noticeable changes can be seen in the styling of the hood, air intakes, side skirts, bumpers, diffuser, and quadruple tipped exhaust system. The wheels are darker in their matte black finish too while the tires are wider and the brake discs are larger. These elements definitely have full-badge AMG written all over them.

Check out more photos of the soon to be unveiled Mercedes-AMG C63 Cabriolet in the gallery below: