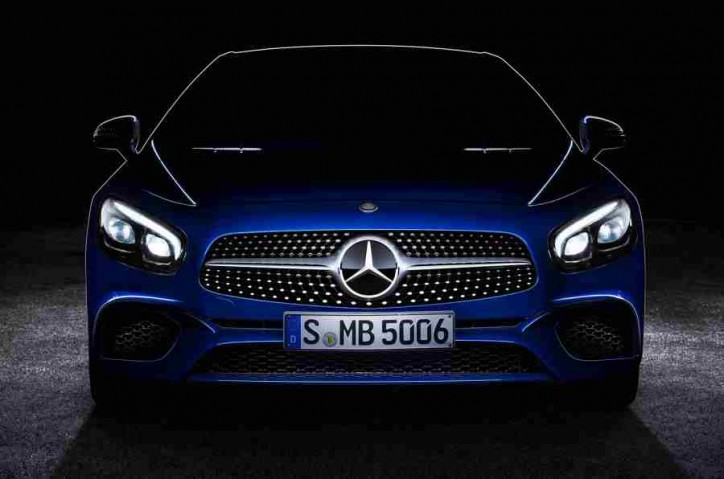 A teaser for the facelifted 2016 Mercedes-Benz SL was recently released by the three-pointed star brand to hype the car’s debut at the Los Angeles Auto Show. Only one photo showing the front of the vehicle was provided. From the image, the bumper, radiator grille, and headlights are visible, but the rest have been darkened.

From the picture, one can see some likeness in the fascia of the upcoming SL with the Mercedes-AMG GT. Some components of the S-Class are evident too like its LED headlights. Spy photos of the car released earlier also reveal that it will benefit from a redesigned rear bumper, diffuser, and exhaust tips. Putting the teaser and the spy photos together will pretty much give us an idea already of what the exterior of the 2016 SL will look like.

So far, we haven’t seen the interior of the updated SL yet. But expect its cabin to be adorned with the S-Class feel through nappa leather surfaces, chrome highlights for the controls plus revised steering wheel and pedals. There should be some tech upgrades as well.

The range-topping unit, the Mercedes-AMG SL63, will likely keep its 5.5-liter biturbo V8 engine. That would enable the auto to produce up to 577 hp and 664 lb-ft of torque, which will in turn allow it to sprint from zero to 100 km/h in just 4.2 seconds while its top speed will be electronically-limited at 250 km/h.