SEND US A TIP
E-Class, Gallery
0

The 2017 Mercedes-Benz E-Class is Nearly Complete 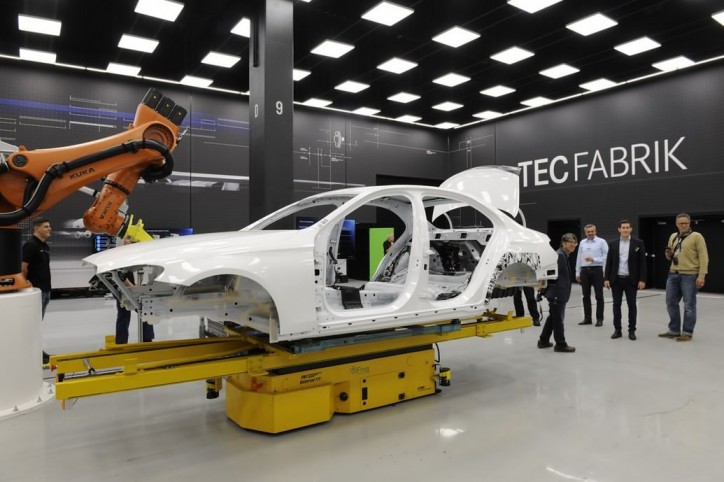 The body of the 2017 Mercedes-Benz E-Class. (Photo Source: Left Lane)

New photos reveal that the 2017 Mercedes-Benz E-Class is nearing completion. Left Lane recently shared some pictures taken from the assembly plant of the three-pointed star brand, which is located in Sindelfingen, Germany.

As the norm, the design of the upcoming E-Class sits between the latest C-Class and the S-Class. According to the source, it will use of the MRA platform of the C-Class.

The next E-Class is expected to have a longer wheelbase than the smaller C-Class sedan. The added length may not be much, as seen in the images here, but the report claimed it will have a lighter weight than the C-Class.

W213 was the name designated to the car by people within the company, based on the article. The source said the AMG version of the sedan will likely carry the downsized 4.0-liter biturbo V8 engine of the company, which is capable of delivering up to 600 hp. It estimated that the 2017 Mercedes-AMG E63 model will be able to accelerate from zero to 60 mph in only a span of 3.5 seconds. The power boost is probably an answer of the company to the perceived rival of the next E-Class, which is the BMW M5.

Another notable feature of the upcoming E-Class is its array of tech upgrades. Among them will be the much-hyped Parking Pilot System.

Looking at the developments so far, we might be seeing the prototype of the car running in the streets by next month already. As for its debut, the report stated it will be unveiled at the Detroit Motor Show in January next year.

Check out some more photos of the car’s body below: