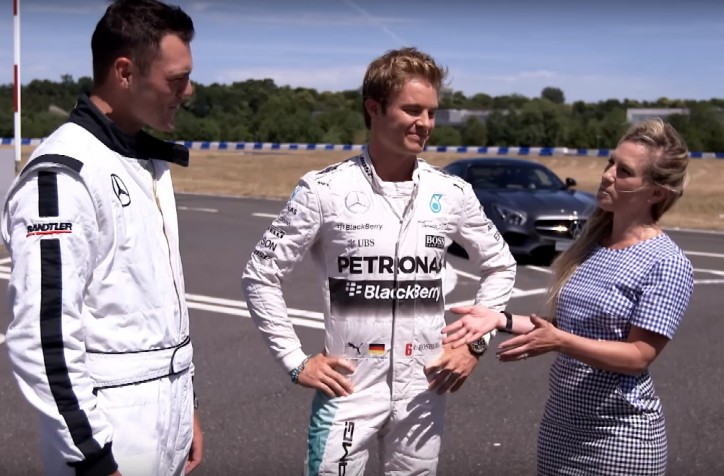 Martin Kaymer and Nico Rosberg are being interviewed by Georgie Ainslie before the first leg of the Mercedes-Benz Stars Challenge.

In this year’s Mercedes-Benz Stars Challenge, Mercedes-AMG Petronas Formula One Team driver Nico Rosberg faced the top German golfer Martin Kaymer. The two were set to undergo a series of tests for some bragging rights. But according to Georgie Ainslie, the show’s host, the loser will be donating a car load of personalized memorabilia to his opponent’s online followers.

Both men arrived on the track of Mercedes-Benz World in Brooklands in style from the sexy and sporty Mercedes-Benz GLE 450 AMG Coupe.

The first challenge involved driving the Mercedes-AMG GT S and setting the fastest lap. There was an obvious doubt on Kaymer about winning this one since he was facing one of the top contenders of the F1 title this year, and not to mention, someone who has been making a living out of racing cars.

However, to make the contest more unpredictable and to give Kaymer a fighting chance, he was allowed a flying start while his opponent had to begin his lap from a stationary position.

Watch the video below to see who won the first challenge:

And the Winner Is…

Mercedes-Benz brand ambassador Martin Kaymer was triumphant in the first challenge by setting a time of 43.34 seconds. On the other hand, F1 driver Nico Rosberg finished 43.57 seconds.

Kaymer had beaten Rosberg at his own game in just 0.23 seconds. Then again, some might say driving a sports car is not necessarily like driving an F1 car, which is true. But for someone who makes a living out of driving race cars, there was certainly a lot of expectations for Rosberg to win this one.

Stay tuned for more challenges between these two gentlemen in the following episodes of Mercedes-Benz TV.