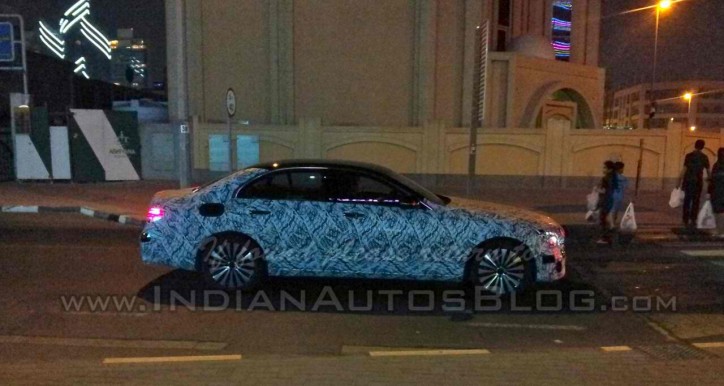 The 2017 Mercedes-Benz E-Class prototype was recently spied in Dubai. In the photo provided by a reader of IndianAutosBlog, the sedan is seen in heavy camouflage, effectively hiding its exterior design.

It could be noticed though that the car is using the MRA platform of the three-pointed star brand. Then the contours and the length of car hint styling features that sit between the Mercedes S-Class and the C-Class.

The glass in the windows and windshield of the car seems clear of any tint. But due to the distance of the person taking the picture, we could not make out its interior features. However, it is expected to offer fewer buttons in its controls, similar to the Concept IAA. Moreover, it is speculated that it might adopt the same luxurious upholstery found in the latest S-Class.

The best highlight of the 2017 Mercedes-Benz E-Class though is the technology it offers. The most advanced feature of the car that we know so far is its Parking Pilot System.

The system utilizes the smartphone as the remote control of the user when parking the auto. Steering is automatic but moving the car requires the user to do continuous circling motion using the finger on the touchscreen of the device. This is a little similar to the Remote Control Parking system introduced in the 2016 BMW 7-Series.