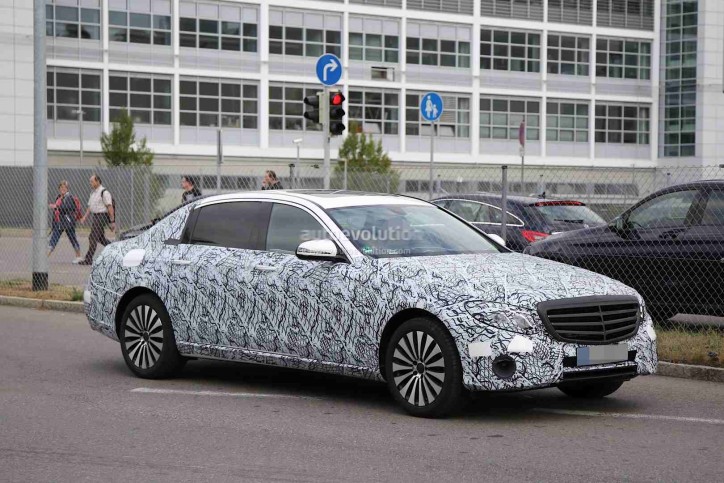 Just after revealing the much hyped Mercedes-AMG C63 S Coupe, it looks like our favorite luxury brand is on to something more. Recently, spy shots revealed a new prototype of the three-pointed star marque. Based on sources, it might be the Mercedes-Maybach E-Class.

There have been hints earlier this year from the interviews of several company executives that the Mercedes-Maybach will be expanding its lineup. So after the ultra-opulent Mercedes-Maybach S600, it just makes a lot of sense that the next focus of the luxury automaker for its new Maybach variant will be centered on the E-Class. After all, the E-Class core series is just a notch down the S-Class anyway.

The platform of the car definitely says E-Class, but how can it be its Maybach version? Judging the photos provided by Auto Evolution, the auto has a longer wheelbase than the standard model of the range or even for a Mercedes-AMG variant. Then the C-pillar of the prototype  shows the signature Maybach design.

So far, there’s no word about the engine options of the Mercedes-Maybach E-Class as the company is yet to confirm this speculation. For a car this size, it is possible that it will be fitted with around 500 hp unit similar to the V12 equipped in the Mercedes-Maybach S600.

As for the tech within the car. It might get the new Parking Pilot System and the other goodies we featured in our previous report.

Check out the rest of the spy photos of the upcoming Mercedes-Maybach segment of the E-Class in the gallery below: