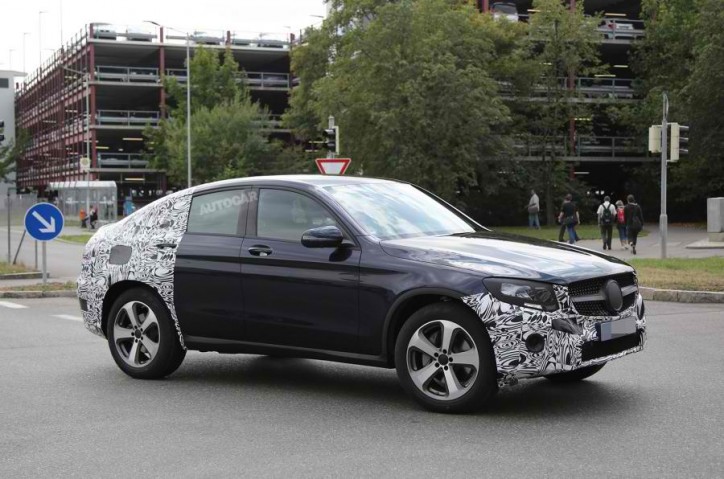 New spy photos of the 2016 Mercedes-Benz GLC Coupe made it online again. The pictures from Autocar show the SUV with partial camouflage, hiding its bumper and the rear portion starting from the auto’s C-pillar—similar to the ones we have seen before.

Even after the unveiling of the standard GLC, it is quite puzzling why the headlights and front bumper of the GLC Coupe remain hidden from plain sight. It gives the impression that the compact SUV might feature significant changes in the covered areas compared to its standard model, which succeeded the GLK.

Looking at the Mercedes-Benz GLE Coupe, which went straight for the AMG Sport and full-AMG badges, it is possible that the front of the GLC Coupe will be different than its standard variant. The GLC Coupe will likely replicate the move done to the GLE Coupe.

The Mercedes-Benz GLC Coupe was unveiled at the Shanghai Motor Show this year. It is basically a downsized version of the GLE Coupe.

The Mercedes-Benz GLC Coupe we are looking at so far seems no different from its concept model unveiled in China. It follows the same slope seen in the GLE Coupe, but the wheels appears smaller this time. The fascia is more refined also and it reflects the same styling found on the C-Class and the standard GLC.

There is no official confirmation yet about the engine options for the Mercedes-Benz GLC Coupe. However, it is likely that it will once again mirror the types offered by the GLE Coupe.