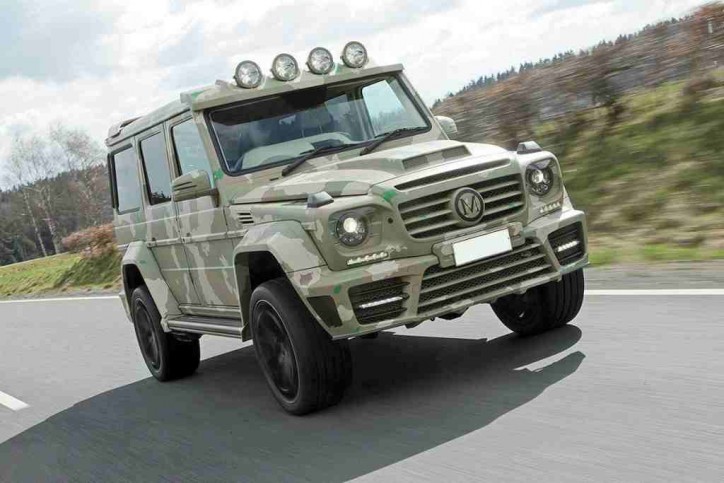 The Sahara Edition of the Mercedes G63 AMG by Mansory.

The Mercedes G63 AMG is a certified off-roader due to its power, and given the right tires. Recently, Mansory gave its magic touch on the vehicle to make it blend more with the outdoors.

The highlight of Mansory’s new package for the Mercedes G63 AMG is its desert camouflage paint. Then its body was fully-customized using carbon fiber elements.

The hood, grille, and front bumper of the auto were redesigned to feature a more military-inspired look. The fenders also looked wider than the straight from the factory version of the G63 AMG. Moreover, the G-Class received a seat of floodlights on its roof plus a spoiler on the rear portion.

The upgrades were topped off with 22-inch alloy wheels wrapped in 305/35 tires. The tires are only for the road version of the SUV though. Customers can opt to change them for off-road trips.

Going inside the Mansory G-Class will reveal more army-themed treatment. It got the white leather and alcantara with marble camo finish. Falcon head and wings were artfully emblazoned on the seats and other key areas of the SUV as well to give the interior a more patriotic feel.

Last but not least, opening the hood of the G63 would show its upgraded power unit. The 5.5-liter biturbo V8 engine of the vehicle has been tuned to deliver up to 828 hp and 1,000 Nm of torque.

Customers who wish to buy the Mansory Mercedes G63 Sahara Edition should be prepared to shell out around 770,000 euros.

Check out more photos of the tuned G-Class in the gallery below: