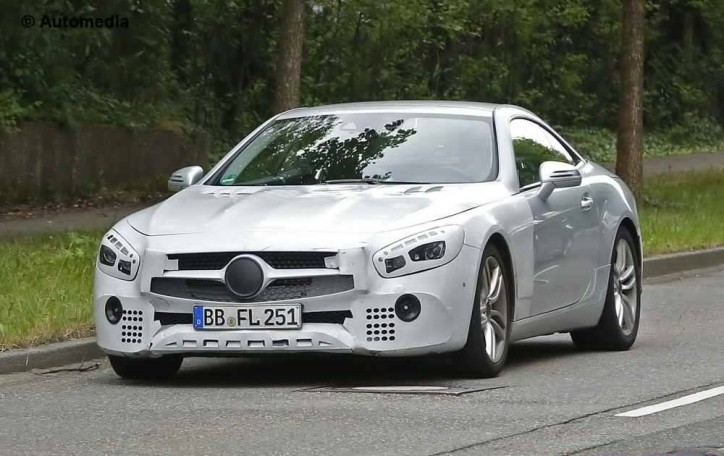 New spy shots of a Mercedes-Benz prototype recently surfaced. The photos show the facelifted Mercedes-Benz SL as it is being tested on the road.

Compared to the previous photos of the updated SL, this new set displays the unit with a lesser level of camouflage. The roof, as well as the rear of the car are visible now, showing us its sexier frame.

Almost everything in front of the prototype is still hidden from view. These are hints that major revisions in the hood, headlights, and front bumper are in the works.

The face and lighting system of the convertible is expected to follow the one found on the latest Mercedes-Benz S-Class coupe. Furthermore, the addition of the Multibeam LED technology is likely.

Going around the back of the car reveals more cosmetic enhancements in its rear bumper and exhausts.

As for the power unit of facelifted SL, a souped-up collection of V6 and V8 engines is possible. It is not clear whether the V12 engine type will make a comeback, but let’s just keep our fingers crossed on that one.

It is rumored that the facelifted Mercedes-Benz SL will make its world premiere in December this year. It is also speculated that deliveries of the car will start in March 2016.

Check out the other spy photos of the upcoming model of the SL in the gallery below, which shows the various angles of the car: