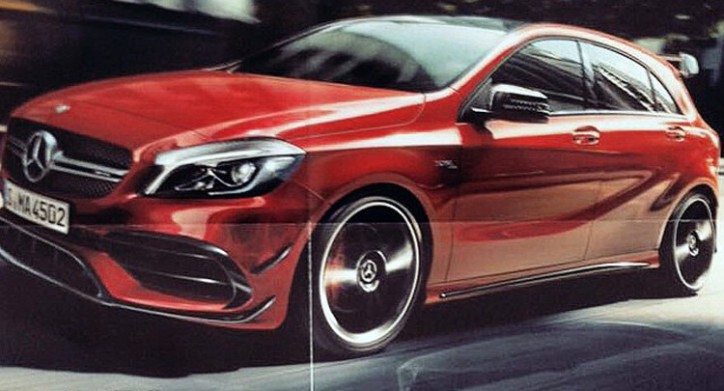 A shot of the flyer showing the facelifted 2016 Mercedes-AMG A45.

A photo of the facelifted 2016 Mercedes-AMG A45 was recently seen circulating the Internet. As seen above, the image was taken from a flyer, which was supposed to be released in the future to promote the performance version of the hatchback.

The picture revealed the specifications of the car too. According to the information on the flyer, the upcoming Mercedes-AMG A45 will carry a 2.0-liter turbocharged engine. The power unit will have an output of 376 hp. It should be noted that the current model has 355 hp, so that’s a 21 hp boost compared to its predecessor.

A Mercedes-AMG A45 S was also suggested by the ad. The source said it will come with an engine tuned up to 395 hp. Now that’s a lot for a hatchback.

From the angle of the car’s shot, it will have a revised bumper featuring a different design in its openings. The grille was also updated to appear sportier. The design of its front lights seemed to have been upgraded as well. Furthermore, the side skirts looked better with a chrome lining, and the side mirror caps were replaced.

We couldn’t tell the rest of the modifications available in the performance version of the A-Class because only the front of the car was captured in the photo leak. But revisiting the other works of AMG, the facelifted 2016 Mercedes-AMG A45 might have updated taillights, improved rear bumper design, new rear wing, redesigned diffuser and quadruple tailpipes.