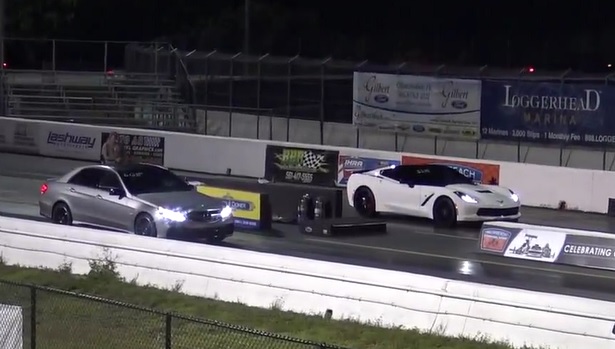 Here’s another video pitting German versus American car engineering. This time, we will feature a race between the 2015 Mercedes-AMG E63 S sedan and the 2015 Corvette C7.

We are already well-acquainted with the 2015 Mercedes-AMG E63 S. As a recap, the car carries a 5.5-liter biturbo engine enabling it to produce up to 577 hp and 590 lb-ft of torque distributed to all it wheels through a seven-speed MCT automatic transmission gearbox. The figures allow the car to go from zero to 60 mph in only 3.5 seconds and gain an electronically-limited top speed of 186 mph.

On the other lane is the 2015 Corvette C7. According to the description of the video uploaded by Road Test TV in YouTube, the American car is equipped with a 6.2-liter naturally-aspirated LT1 V8 engine with an output of 455 hp and 460 lb-ft distributed through its brand’s new seven-speed manual transmission. The numbers allow the car to sprint from zero to 60 mph in just 3.8 seconds. It should be noted too that the two-door Corvette is a lot lighter than its sedan rival in the video.

Without further ado, here’s the race between the two:

The Mercedes driver noticeably was slow in reacting during the start of the race, allowing the Corvette to have the jump earlier and reach the finish line first. However, looking at the data of the source after the end of the race, the Mercedes had a quicker lap time with 12.25 seconds at 118 mph compared to the other car’s 12.51 seconds at 118 mph. It should be mentioned as well that the Mercedes driver did not take advantage of his car’s launch control during the event.