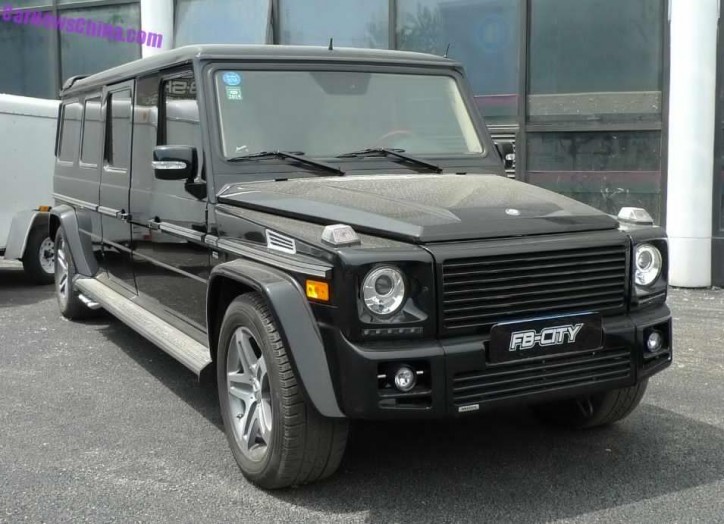 One impressive Mercedes G55 AMG was recently spotted in China. This particular G-Class featured major modifications in its body plus engine upgrades, and it was rechristened as the Brabus G-K8.

According to CarNewsChina, the Brabus G-K8 was introduced at the FB-Show 2015 held in Beijing.

The most noticeable aspect of the SUV was its extra two-meter overall length as its middle was stretched to transform it into a limousine. The tuner of the Mercedes G55 AMG completely removed the standard middle doors of the vehicle to make room for suicide doors. Then all windows of the unit were heavily tinted, which effectively hid its interior from the outside. A set of three exhaust pipes for each side was also placed in front of the rear wheels replacing the normal twin-tipped exhaust system found on each side of the Mercedes G55 AMG.

In addition to these, a large wing was placed on the rear end of the limo’s roof for extra downforce. The other notable features of the Brabus G-K8 were its AMG wheels and spare wheel in a chrome cover.

Since Brabus is known to tinker with the engine of any Mercedes its specialists get their hands on, the stretched Mercedes G55 AMG here has been imbued with extra horsepower and torque. The overall engine output of the SUV has been brought to 530 hp and 775 Nm. Its top speed was raised to 230 km/h as well.

Check out the other photos provided by CarNewsChina of the extra-long Brabus Mercedes G55 AMG, aka the Brabus G-K8, in the gallery below: