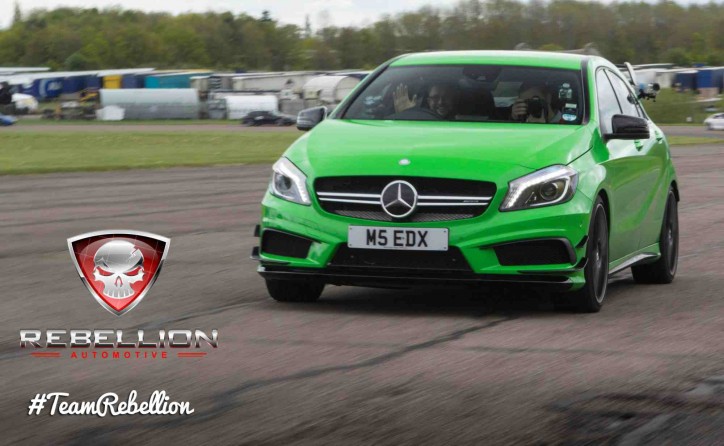 A Mercedes A45 AMG tuned by Rebellion Automotive. (Photo via MBWorld Forums)

The Mercedes A45 AMG may be a cub compared to its stockier brothers in the Mercedes-Benz lineup. Despite its size, it does pack quite a punch from its 2.0-liter four-cylinder turbo engine with an output of 360 hp and 450 Nm of torque.

It’s fast though it could be easily dwarfed by pure sports cars with V8 or V12 engines under their hoods. But a new tuning package for the auto might change your perception on it.

Recently, Rebellion Automotive revealed its work on the Mercedes A45 AMG through MBWorld Forums. The car received the group’s stage two tuning package with their signature ECU flash. The resulting output was at 460 hp and 630 Nm.

The A45 AMG’s speed limiter was also removed, plus its throttle response and gear shifts were enhanced. In addition, the package provided the compact car a new four-inch downpipe, three-inch mid-pipe, and four-inch intake.

So what happens if this Mercedes A45 AMG is unleashed on the road?

Rebellion Automotive tested the car at Vmax200 against a Lamborghini Aventador. Now that may sound ridiculous, but the A45 AMG actually beat the super car in the video uploaded by the tuner in its official Facebook page.

Based on the data collected by Rebellion Automotive during the race, the car could go from zero to 60 mph in only 3.4 seconds. Then, it could easily reach 100 mph from a complete standstill in mere 8.4 seconds. No wonder it beat the Lamborghini at the Vmax200 event easily.

According to the tuner, the cost of the stage two tuning kit for the Mercedes A45 AMG is £1,995.