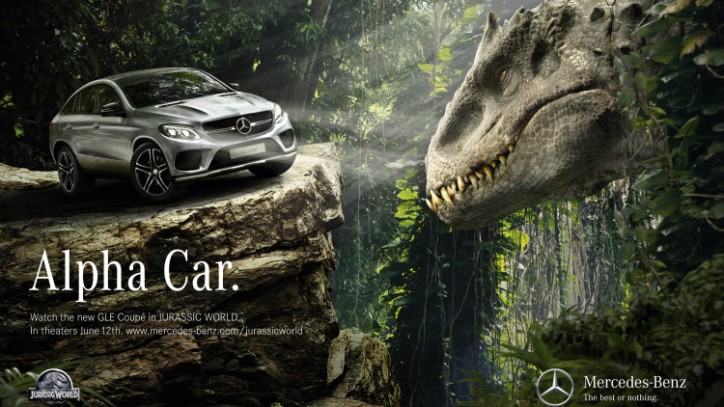 Promotional poster of the Mercedes-Benz GLE Coupe featuring a dinosaur in the movie Jurassic World.

Earlier teasers of the movie Jurassic World revealed that it will be showcasing the new Mercedes-Benz GLE Coupe alongside its CGI dinosaurs. Like in the previous installments of the movie, going back to Jurassic Park, Mercedes-Benz has been chosen again as the official ride of the major characters of the movie, which are played this time by Chris Pratt (the lead actor in Guardians of the Galaxy) and Bryce Dallas Howard (the antagonist in several Twighlight Saga movies).

It should be noted that information before about the presence of Mercedes-Benz in the movie were very scarce. Images of the GLE Coupe in the movie were particularly very limited. But a couple of days ago, Daimler confirmed through its Global Media Site the partnership of Mercedes-Benz and the creators of the soon-to-be blockbuster Sci-Fi/suspense film—Universal Pictures and Amblin Entertainment. The company also released the much-awaited photos of its vehicles in the film in its latest press release.

In addition to the Mercedes-Benz GLE Coupe, Mercedes vehicles from the G-Class, Unimog and Sprinter lineups will be featured. The Unimog, transformed into a mobile veterinary unit, and the G63 AMG 6×6 were specifically impressive. Well, if you are going to be taking care of creatures that could outrun you anytime and eat you in one bite, these two are your ideal rides.

Photos of All the Mercedes-Benz Units in Jurassic World

Check out the photos of Mercedes-Benz within the Jurassic World in the gallery below: