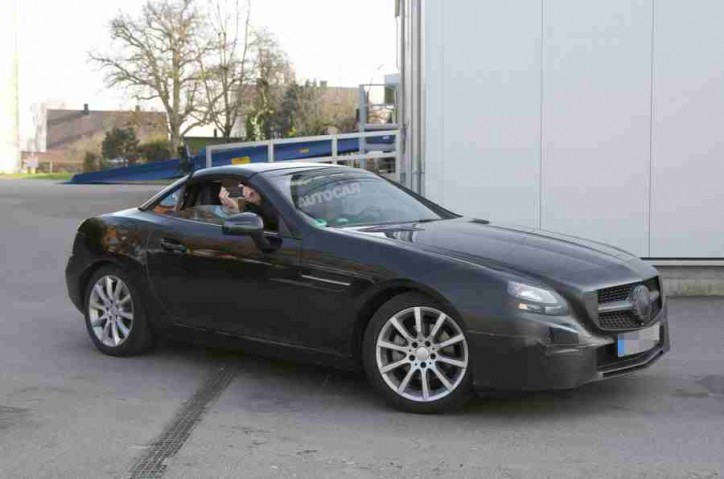 A new spy photo of the Mercedes SLC, formerly known as the SLK. (Photo Source: Autocar)

More spy photos of the facelifted Mercedes-Benz SLC, formerly known as the SLK, continue to appear online. There is also a new rumor about the possible engine specification of the upcoming car, and its probable official debut.

The latest spy photos of the SLC provided by Autocar really do not show anything new, based from what we have learned about the stylish Mercedes so far. It’s just that the paint of the subject this time is in black—a contrast to the white one we featured earlier.

One worth noting in the Autocar report though is the likely power unit of the roadster. According to the source, the SLC will carry the new 4.0-liter biturbo V8 engine of the three-pointed star brand’s performance division. However, the specs will not merely mirror the output of the Mercedes-AMG GT, instead it would be similar to the more powerful Mercedes-AMG GT S with 510 hp and 650 Nm of torque.

The Official Debut of the New SLC

The article claimed as well that the world premiere of the updated Mercedes SLC will take place next year in January at the 2016 Detroit Motor Show. With that said, it will likely carry a 2017 model year.

Check out the gallery below for some of the most recent spy shots of the Mercedes SLC: