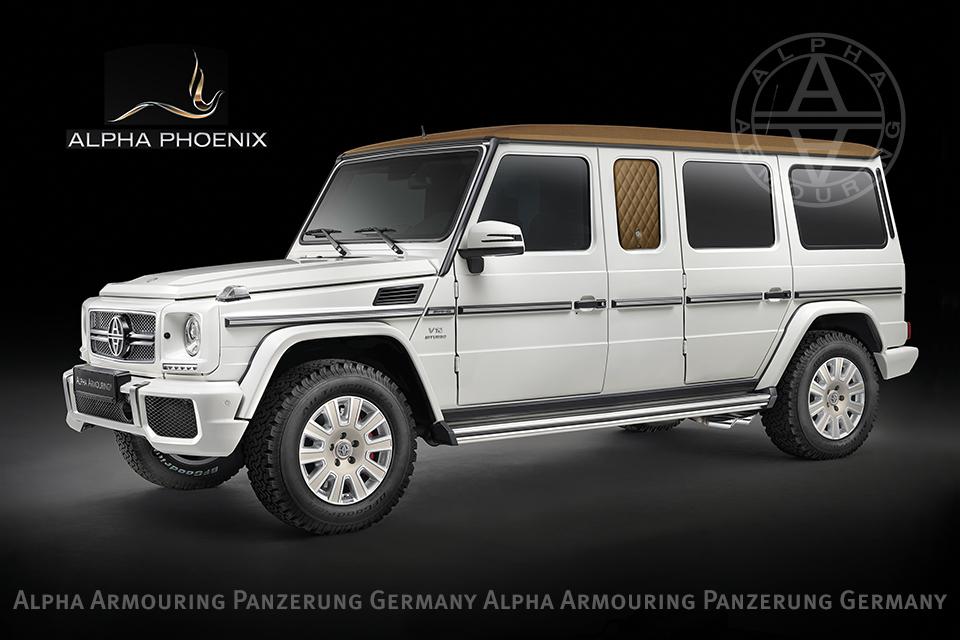 The Top Marques Monaco 2015 held in Monte Carlo became the venue for the introduction of the Phoenix of Alpha Armouring, as shown on a report from woldcarfans.com. The Phoenix is essentially a stretched version of the Mercedes-Benz G63 AMG.

While some people may find a stretchedd G-Wagen rather peculiar, it does have a strange appeal to it, particularly when it comes to its interior. Forty-five centimeters were added to the length of the G63 AMG, which made it appear like a cross between a limousine and an SUV. To achieve this, Alpha Armouring had to modify the structure of the G63 to increase its length.

The rear passenger section of the Phoenix is separated from the front section by a partition wall. Due to its bigger space, the passenger compartment has a number of notable features including a pair of individual rear seats, 34-inch television display, refrigerator, and a Mac Mini. Passengers can also use the four cameras in the exterior to check on what’s going on outside.

The passenger section also has its own climate control system, high-end sound system, and an iPad touch pad control system. Alpha Armouring also provided passengers a way of communicating with the driver through an intercom system, which can be also used to communicate with people outside. To top it all off, the tuned Mercedes-Benz G63 AMG also has its own sirens and flash lights.

Aside from its armor, the Phoenix also comes with a set of heavy-duty aluminum wheels, specialized glass, and a fire extinguishing system to deal with fire in the engine. The enhancements made on the G63 AMG were so comprehensive that it took around six to eight months before it can be transformed into the Phoenix. The Alpha Armouring-tuned Mercedes-Benz G63 AMG has a price tag of around one million Euros or around $1.1 million.