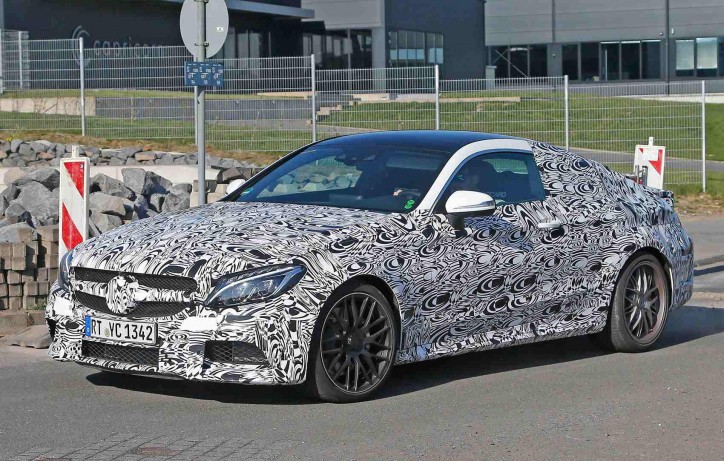 The new Mercedes-Benz C-Class Coupe is yet to hit the road. However, spy photos of its performance model, the Mercedes-AMG C63 Coupe, are already hitting the Internet.

As shown in the spy photos above and in the gallery below, we are quite sure that what we are looking at is the performance version of the latest C-Class Coupe because of its more aggressive styling than the standard version. The intakes appear to be larger and the front bumper looks more sporty. Then, going around the car reveals a similar quadruple exhaust system found on the Mercedes-AMG C63 sedan. One more giveaway is the set of performance wheels fitted into the auto.

According to various sources, the Mercedes-AMG C63 Coupe will likely carry the same engine found on its sedan counterpart. So, expect a 4.0-liter biturbo V8 engine under its hood. That means an output of around 469 hp and 479 lb-ft of torque.

There will likely be a C63 S version of the car too, which will pump out about 503 hp and 516 lb-ft of torque. The specs will enable the Mercedes-AMG C63 S Coupe to go from zero to 100 km/h in a span of less than four seconds while its top speed should be electronically-limited at 289 km/h.

Check out the spy shots of the new Mercedes-AMG C63 Coupe in the gallery below, which were provided by Car Magazine: