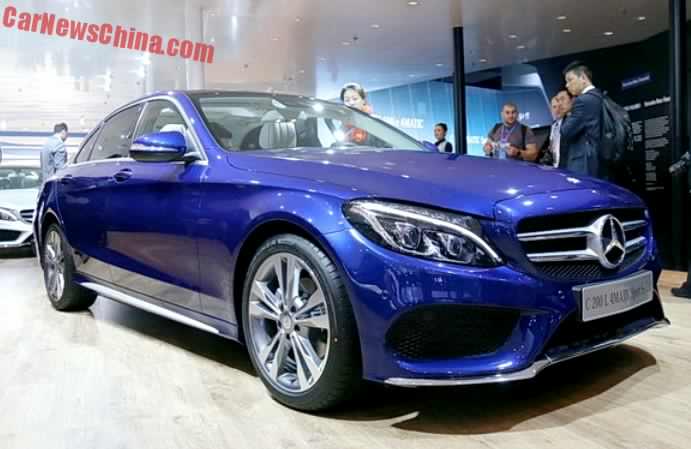 Aside from Concept GLC Coupe, Mercedes-Benz also unveiled its C200L 4MATIC sedan at the 2015 Shanghai Motor Show. The car is the long wheelbase version of the Mercedes-Benz C-Class. In addition, the car is the first model in the Chinese C-Class segment to get the 4MATIC system, according to CarNewsChina.

The long wheelbase Mercedes-Benz C-Class 4MATIC is a unique model as it features both a sporty and stretched design. The car would be exclusively available to customers in China.

The source said the stretched Mercedes-Benz C-Class 4MATIC is equipped with a 2.0-liter petrol-powered four-cylinder turbo engine. Its output is 184 hp with 300 Nm of torque. The power is distributed to all its wheels via a seven-speed automatic gearbox.

This Mercedes-Benz C-Class really does not offer anything new in terms of styling, aside from the longer wheelbase and the shiny L-shaped ornament in its C-pillar that serves to remind everyone that they are not just looking at the standard version of the car.

The long wheelbase Mercedes-Benz C-Class 4MATIC is the three-pointed star brand’s response to the demand in the Chinese region for more spacious luxury cars. The auto is stretched by six centimeters compared to the standard model, and the back features more room for its passengers. This is a reflection of the preference of the wealthy individuals in China who like to be chauffeured to their destinations.

Check out more photos of the Mercedes-Benz C200L 4MATIC below, which were provided by CarNewsChina: