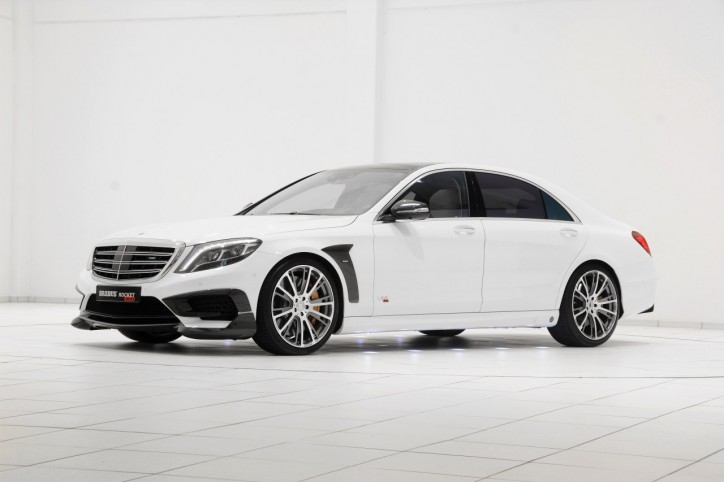 The Brabus Mercedes S-class Rocket 900 is poised to make its debut at the 2015 Geneva Motor Show this month.

Another luxury car that will be gracing the 2015 Geneva Motor Show will be the Brabus Mercedes S-Class Rocket 900. Basically, it contains all the usual body kit elements and engine tweaks of the famous aftermarket tuner for the three-pointed star brand’s vehicles.

Previously, we saw the tuning firm unveil its  Brabus 850 Mercedes S63 AMG. To freshen up everyone’s memory, it was the reconfigured Merc with a whopping output of 850 hp from its 5.5-liter biturbo engine.

If the 850 hp output is not yet enough for you, and you have a lot of money to spend on a luxury car, the Brabus Mercedes S-Class Rocket 900 is a better alternative. As the name of the car implies, it packs an explosive 900 hp output from its V12 biturbo power unit.

Also, compared to the Brabus 850, the Rocket 900 is a big leap from it. It features more visually striking aero components and the same level of opulence presented by the Maybach sub-brand in its interior. However, it should be noted in one of the photos that the steering wheel of the super luxury car is sporty in design. So, it’s more like a mix of extra-luxurious and sporty features.

The powerful output of the Mercedes S-Class Rocket 900 will likely allow it to gain a top speed of up to 350 km/h. Then, its acceleration from zero to 100 km/h would most probably fall only by 3.5 seconds.

Below are more photos of the Brabus Mercedes S-Class Rocket 900: