SEND US A TIP
Motorsport, SL
0 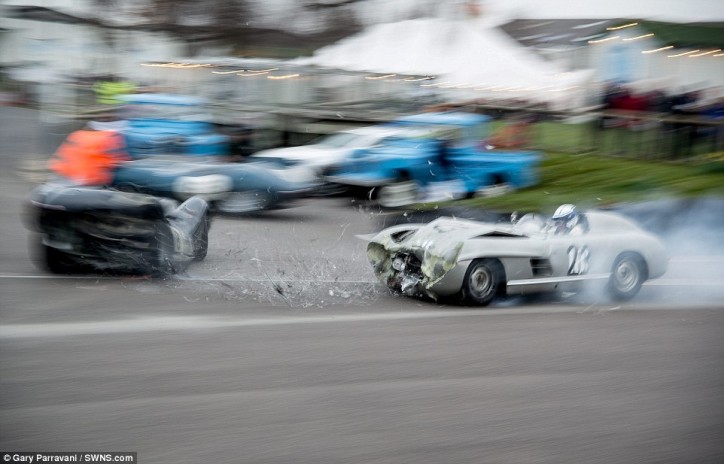 Last Saturday, two iconic cars with a combined value of around £5 million were on a collision course during a qualifying race at the 73rd Goodwood Members’ Meeting. The two involved were a 1955 Mercedes SLS 300 “Porter Special” and a 1959 Lister-Jaguar “Knobbly”.

According to Daily Mail, the 1955 Mercedes SLS 300 had an estimated value of £4 million while the Jaguar was priced at approximately £1 million. Both cars were left in a really bad shape after the incident on the Goodwood track.

The source said the Mercedes was owned by Dr. Klaus Lahr, a German car collector. It came from the factory as a Mercedes 300 SL, but it was customized after a very serious car crash in its early life.

The classic Merc was transported all the way to Sussex mainly for the 2015 Salvadori Cup. The car was driven in the event by Jochen Mass, a decorated racer and the official driver of the classic cars at the Mercedes-Benz Museum.

The other car in the mix was owned by Barry Wood. It was piloted by Tony Wood.

The article reported that the Jaguar was going into the pits when the Mercedes came speeding along the chicane. Mass noticed the slowing car, and he hit the brakes. However, his wheels allegedly locked up, so the momentum led him straight to the tail of the Jaguar.

As seen in the photos provided by the news item, the front end of the Mercedes was wrecked. Its condition was so bad that it was towed out of the way. The report stated it is unlikely that the car would be fully-restored to former glory.

The Jaguar didn’t fare any better too. It’s rear collapsed like an accordion.

Luckily the drivers of the cars were okay, and it appeared that they didn’t sustain serious injuries.

Check out the other photos of the crash in the gallery below: