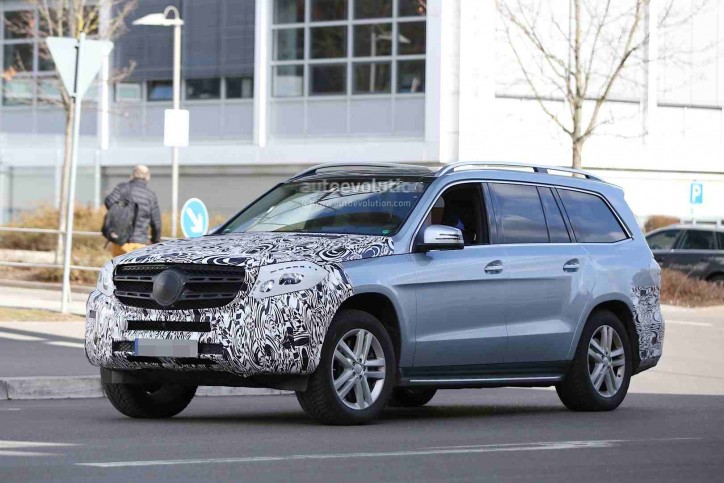 The spy photo of a facelifted GL-Class, which will be renamed the Mercedes-Benz GLS. (Photo Source: autoevolution)

Spy photos of the 2016 Mercedes-Benz GLS recently hit the web. Based on the images supplied by autoevolution, the new SUV of the three-pointed star brand will still make use of the latest GL platform. Therefore, the changes will be nothing more than a facelift, not another generation of the vehicle. The auto would most likely carry a few styling upgrades on its exterior, as well as a more advanced tech.

Since the GLS is inspired by the S-Class core series of Mercedes, it’s expected to carry some of the distinguishing traits of its flagship sedan brother. Among the redesigned areas, as indicated by the camouflaged portions, will be the LED head and taillights, the bonnet, bumpers, and diffusers.

Although the images do not provide a good view of the SUV’s interior, we strongly bet that it will get some enhancements as well in its cabin’s visual and comfort features. Add to that some updating on the navigation and entertainment system of the auto too.

As for the power unit, one of the variants of the Mercedes-Benz GLS might be equipped with the 4-liter biturbo V8 engine. That’s the same engine that will be powering the upcoming Mercedes-Benz G500 4×4².

It is almost certain that the GLS will get an AMG Sport, full-AMG, and BlueTEC versions. However, if we were to look back at Mercedes’ earlier hint of a Maybach SUV, in addition to the versions mentioned may be a GLS Maybach later.