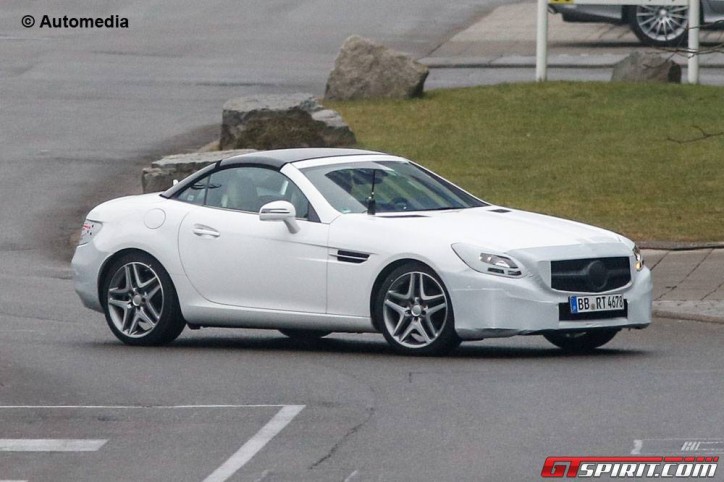 The Mercedes-Benz SLK, which will be rechristened as the SLC, was recently spied with minor updates in its styling.

Spy photos of a Mercedes-Benz SLK with light camouflage was recently spotted. The images were captured while the car was undergoing testing.

Since the covered areas indicate the parts of the convertible that will undergo changes, the minimal upgrades would only mean that the existing model of the SLK will just undergo a facelift. It is expected that the facelifted SLK will be renamed as the Mercedes-Benz SLC once it comes out, based on the new nomenclature system of its maker. Then, it will likely bear a 2016 model year.

It is hard to discern the camouflage of the Mercedes-Benz SLC because of the quality of the photos provided by GT Spirit, and due to the use of a covering that is the same with the car’s paint. However, it certainly looks like the front, which includes the headlights, bumper, and grille, will be redesigned. The taillights going to the rear bumper  seem to be wrapped in camo as well. So, anticipate updates on those components too, together with the exhausts.

No photos of the interior were available. But knowing how Mercedes pays particular attention to quality, it will probably have more stylish leather surfaces in the cabin later.

Under the hood, the German automaker might ditch the current power unit of the SLK in favor of its new 4.0-liter biturbo V8 engine.

More Spy Shots of the Mercedes-Benz SLC with Facelift

Check out the other spy photos of the facelifted Mercedes-Benz SLC below: