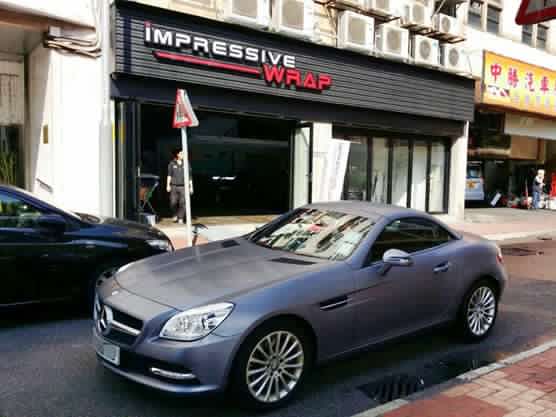 Recently, Impressive Wrap revealed its new work done on the 350 model of the Mercedes SLK. The company with branches in the US and Hong Kong gave the 302 hp car a new and rare look with its brushed steel coating.

The Mercedes SLK is one of the most beloved among the products offered by the three-pointed star brand. The range has been around since 1996. Over the years, the range has evolved and it is currently in its third generation.

While the earlier versions of the car were widely praised by consumers and critics primarily due to their styling and luxurious features, the latter variants going to the present became a bit stale. Some even consider the Mercedes SLK as a toned down version of the SL. However, with the way Impressive Wrap handled the car this time, it somehow rejuvenated its appeal.

The brushed steel wrap gave the SLK a cool, showy and luxurious look all at the same time. The photos here may not reflect the actual quality of Impressive Wrap’s work, but looking the car up close and personal will surely let you appreciate its detailed texturing and meticulous treatment. The job done by the company is what the SLK truly deserves.

Check out the gallery below for some of the photos of the Mercedes SLK with a brushed steel look courtesy of Impressive Wrap: