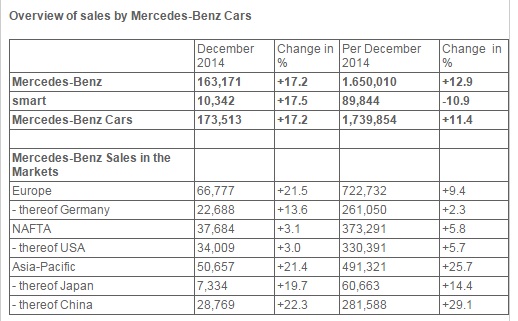 Overview of Mercedes-Benz sales taken from the Media Newsroom of Daimler.

The official tally of Daimler regarding its sales in 2014 was recently published on its Global Media Newsroom. According to the data found there, Mercedes-Benz sales increased by 12.9 percent based on a year-on-year comparison. The rate translated to a total of 1,650,010 vehicles sold worldwide.

The achievement of the three-pointed star brand this year marked its fourth consecutive record year. The year that just ended was highlighted by December being the strongest month of the brand, successfully getting 163,171 sales for its units. Its final quarter was also considered as its best for the year, listing 454,854 sales.

U.S. remained as the largest market of the brand with an overall sales of 330,391. Despite losing the luxury car market of the area to BMW, the figures shown were 5.7 percent higher than its previous year.

China emerged next to U.S. in sales. The company listed 281,588 sales in the region. The increase in Mercedes sales over the country was a whopping 29.1 percent. It should be noted that China surpassed Germany as the second largest market of Mercedes in 2014.

Daimler also revealed that Mercedes-Benz was the market leader in Germany, Japan, Australia, Canada and Russia. Basically, all the large markets of the automaker reached record-topping numbers.

The compact vehicles of Mercedes such as the A-, B-, CLA- and GLA-Class were the most popular in its lineup. A 24.7 percent growth, translating into 463,152 units sold in the said models, was reflected in its record books.