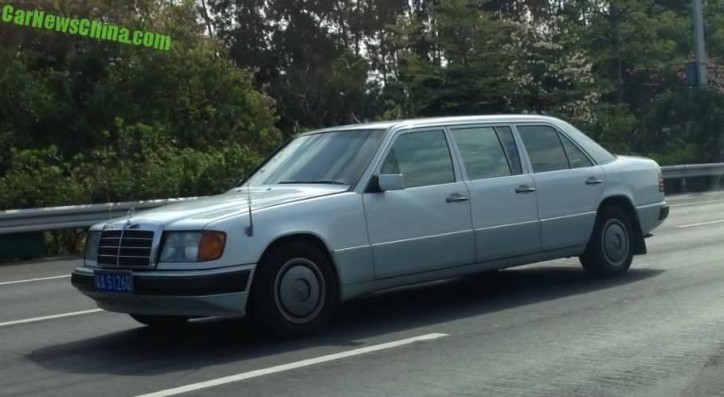 Long before the Mercedes S600 Pullman was the W124 Mercedes-Benz E-Class limousine. A couple of weeks ago, the car was spotted traversing the airport expressway in Guangzhou, located in the Guangdong Province of China.

Unlike the soon-to-be-released S-Class stretched limo with only four doors, the Mercedes-Benz E-Class limousine had six doors. The earlier limo of the three-pointed star brand was also shorter than the upcoming one with just a 5,540 mm overall length and a wheelbase measurement of 3,600 mm. Both cars have three rows of seats though.

The classic car in the picture is a 260E. It is equipped with a 2.6-liter six-in-line with an output of measly 170 hp. It is definitely nothing compared to the V12 engine of the Pullman, which produces more than 500 hp. However, it is nice to see something that was manufactured sometime between 1985 to 1996 to be in such a good state.

Looking at the long car, it seemed its owner did a really great job in maintaining it. The vehicle appeared to be in pretty good condition as no traces of rust and broken parts were seen in its exterior. The paint came very clean in white too.

According to CarNewsChina, the E-Class stretched limousines were usually owned by state-owned hotels and other government institutions. These were imported into the region around 1990’s. The source noted that the said cars usually came in black, so this white version was something different.

You can see the other photos of the car below showing the side and rear angles of the auto: