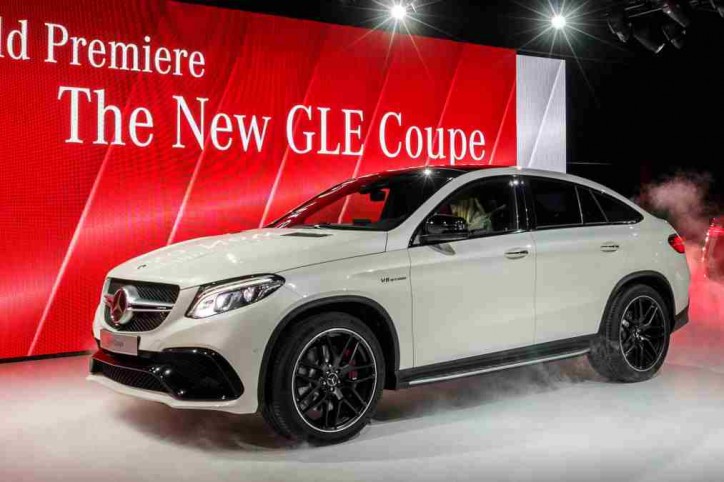 Mercedes-Benz unveils the GLE Coupe to the world during the 2015 Detroit Motor Show.

The biggest star in the 2015 Detroit Motor Show was the entry-level Mercedes GLE Coupe, which was the three-pointed star brand’s answer against the BMW X6.

The highlight of the new range was the Mercedes-AMG GLE 63 S Coupe. As the new nomenclature system of the German automaker implied, the crossover luxury coupe is connected with the new E-Class sedan of the brand.

Despite some traits that the GLE shared with the E-Class core series, it should be noted that Mercedes really did a great job of making its new crossover coupe distinct from its other models, particularly the defunct M-Class.

The vehicle featured an aggressive front fascia bearing a single bar grille, LED headlights, large air intakes, and gloss black flics. Behind it was a quadruple tailpipe exhaust system. Then, it was fitted with 22-inch lightweight alloy wheels sporting a titanium gray finish.

The refreshing design certainly placed the auto one notch higher than its competition, the X6. That’s because its rival from BMW basically pulled a lot of its styling aspects from its predecessor, the X5.

Opening the hood of the Mercedes-AMG GLE 63 S Coupe would reveal a 5.5-liter biturbo V8 engine, similar to the other recent vehicles of its maker that bore the “63” tag. The hardware provides an output of 577 hp and 561 lb-ft of torque. The power is distributed through an AMG SPEEDSHIFT PLUS 7G-TRONIC transmission and connected to a 4MATIC all-wheel drive system.

The mentioned configurations enable the GLE 63 S Coupe to accelerate from zero to 60 mph in only 4.2 seconds. Together with the optional AMG Drivers’ Package, its top speed can reach up to 174 mph.