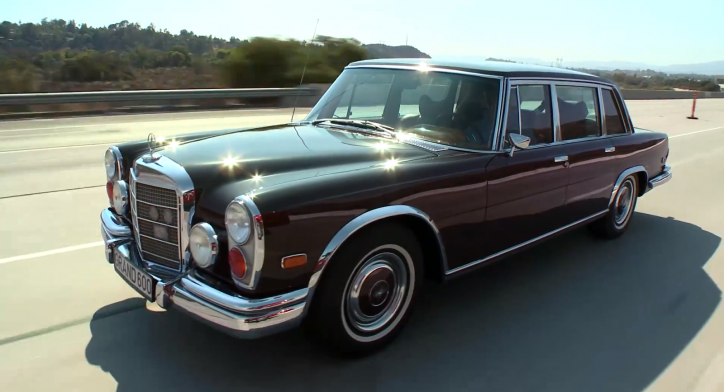 Jay Leno takes the 1972 Mercedes-Benz 600 Kompressor for a spin around the neighborhood.

One of Jay Leno’s passions is cars. That’s why he can be seen attending various car shows and racing events. Last year, one of the major attractions for auto enthusiasts that he participated in was the Mille Miglia.

According to the Television Hall of Famer, among his favorite cars is the 1972 Mercedes-Benz 600 Kompressor. One of the videos he made a few months ago in his YouTube channel called Jay Leno’s Garage was about the car.

The celebrity discussed about how production cost was taken out of the equation when the auto was built back in the 60’s. Instead, Mercedes-Benz just concentrated on putting up a car using the best materials available and utilizing the potentials of the existing technology of its time. The result was it became the most expensive production car of its day with its complex and unique hydraulic system, breathtaking design, high-end and spacious interior, plus a powerful engine. Another thing that made the car in the video special was its fitted with a supercharger enabling it to reach up to 525 hp.

Leno also mentioned that the car brought up a lot of memories before he became famous. He noted that his earlier job was in a Mercedes-Benz dealership. That explained why the three-pointed star marque had a special place in his heart over the years.

Check out the video below for a look at the meticulously-restored 1972 Mercedes-Benz 600 Kompressor in Jay Leno’s Garage: