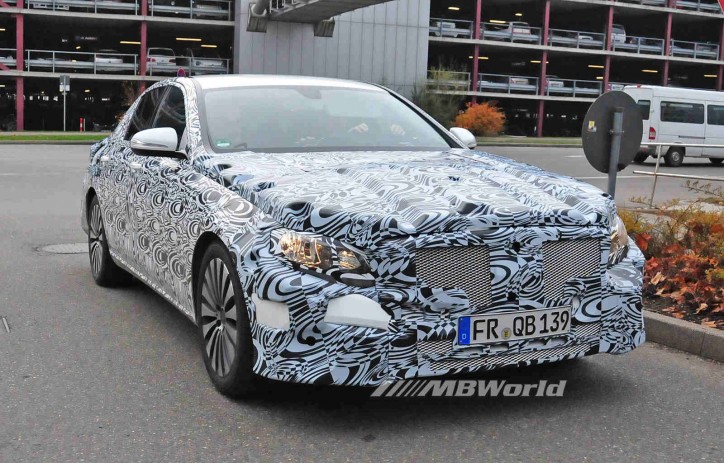 This car is believed to be the next-generation Mercedes-Benz E-Class. (Photo Source: MBWorld)

New photos of a camouflaged car recently surfaced online. According to MBWorld, the subject in the pictures is none other than the next-generation Mercedes-Benz E-Class.

The source claimed that the prototype is the 2017 model of the E-Class. If the model year is true, then we might not be seeing the production version of the auto until 2016.

Going over the pictures, one would notice that the car seems to share the MRA (Modular Rear Architecture) platform present in the C-Class. However, the measurements of the upcoming E-Class appears to be wider and longer than the C.

The article also revealed that the future E-Class will carry lightweight aluminum in the underpinnings. That means the rigidity of its chassis will be greatly improved, plus the driving dynamics and fuel economy will benefit from the feature too.

Since the E-Class core series sits just above the C-Class in the hierarchy of Mercedes cars and one step down below the S-Class, there are a couple of features it shares with the flagship luxury vehicle of the three pointed star marque as well. Taking a peek inside the cabin of the Mercedes-Benz E-Class prototype would reveal that some of the luxurious styling found in the interior of the current S-Class have been carried over.

Despite of the heavy camouflage wrapping the car as of the moment, among the new elements that could be discerned are new headlights and taillights. The mirrors look different than the ones in the current model also.

The source claimed that the new E-Class car will be offered in three and four-cylinder engines. In addition to the usual gas and diesel variants, the post said the auto will be available in plug-in and hybrid powertrains. Expect an AMG Sport and full-blown AMG model of the sedan too.

Check out the additional photos of the E-Class prototype, which were provided by MBWorld: